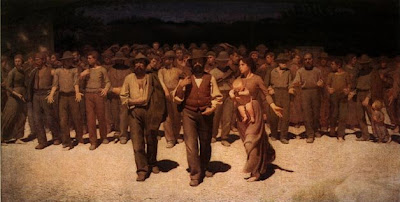 Divisionism/Neoimpressionism: Arcadia and Anarchy, an exhibit of Italian pointillist art opens this week at the Guggenheim Museum in New York. A New York Times review of the show appears here.

Group shows of movements such as these generally tend to disappoint me. Just judging from the reproductions of the paintings on view, you can see how these pointillist artists fail to match the work of the founder of pointillism, Georges Seurat. I always tend to think of the Caravaggisti, the scores of European artists who tried to emulate Carravagio’s stunning photorealist style and dramatic lighting. Room XII of the Vatican Museum’s Pinacoteca (painting gallery) contains Carravagio’s Deposition from the Cross surrounded by Caravaggisti work that tries but ultimately fails, especially in such close proximity. It’s rare that a follower can emerge as strongly in a similar style, especially a style as unique as Seurat’s or Carravaggio’s.

However, it seems that the Italian Pointillists found greater value in following Seurat’s political mission of representing the working class in his art. Giuseppe Pellizza da Volpedo’s Il Quatro Stato (The Fourth Estate), a prime example of Italian Pointillist political art, appears above. The Fourth Estate isn’t in the Guggenheim show, but, as The New York Times review points out, it typifies the working class ethos of this period, raising the painting to iconic status in Italy. The workers marching forward in Pellizza da Volpedo’s painting remind me of the workers marching in Italy when my wife and I honeymooned there only 4 years ago. The tour guides would remark on them casually, as if the strikes were a daily occurrence. I found out later that they were, thanks to the soaring unemployment rates in Italy. Other paintings in the Guggenheim exhibit show this same social concern, proving, unfortunately, that much hasn’t changed in over a century of protest.

[It seems that Giuseppe Pellizza da Volpedo’s Il Quatro Stato (The Fourth Estate) inspired a 2006 Hungarian movie titled Ballada. Extra points for the filmmaker if it’s filmed in a pointillist style.]
Posted by Bob at 5:42 AM