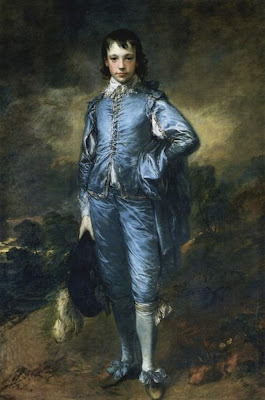 "I'm sick of portraits, and wish very much to take my viol-da-gam and walk off to some sweet village, where I can paint landskips (sic) and enjoy the fag end of life in quietness and ease," complained Thomas Gainsborough, one of the great portrait painters of 18th century England, who celebrated his 280th birthday yesterday, May 14th. Gainsborough’s most famous work, Jonathan Buttall: The Blue Boy, appears above.

Gainsborough remains forever linked to the two other great British portraitists of his era: Joshua Reynolds and Thomas Lawrence. In fact, Gainsborough’s Blue Boy faces Lawrence’s Pinkie (Portrait of Sarah Barrett Moulton) at the Huntington Gallery in San Marino, California. The desire of nobility to be immortalized by this trio has fortunately created a body of work that has been preserved up to today. Of the three, my favor still rests with the work of Lawrence, but I’ll allow that the best of Gainsborough stands up to anyone’s work.

As can be heard in Gainsborough’s complaint above, his talent as a portraitist became a trap over time. Longing to paint the landscape, Gainsborough barely found time to follow his passion. His Holywells Park, Ipswich appears below. Considering his talents as a portraitist, one can only wonder how far Gainsborough could have gone as a landscapist, possibly rivaling the work of even Constable. 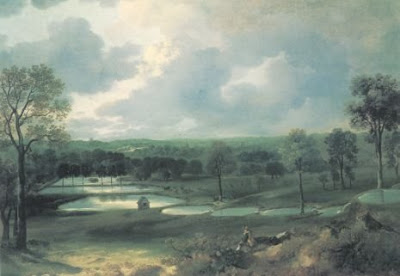 (BTW, Gainsborough’s Blue Boy may lay claim to the title of painting not named the Mona Lisa featured in the most movies. As the Wikipedia entry for Blue Boy indicates, it’s appeared in movies as disparate as Laurel and Hardy’s Wrong Again, The Naked Gun, Ghostbusters II, and the James Bond thriller Die Another Day. With a resume like that, Blue Boy should join the Screen Actors Guild.)
Posted by Bob at 5:57 AM