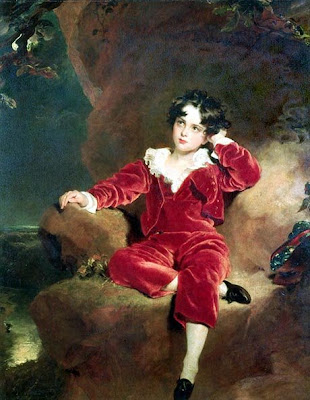 Last Friday, April 13th, was the 238th birthday of Sir Thomas Lawrence, principle portrait painter to King George III of England, third president of the Royal Academy of Arts, one of the greatest portraitists Britain has ever produced, and my choice for the most unfairly obscure, formerly acclaimed artist ever. His portrait of Master Lambton is shown above.

Lawrence followed Sir Joshua Reynolds and Benjamin West as the third president of the Royal Academy in 1820 and held the position until his death in 1830. Despite his renown as one of the greatest portrait painters of his age, Lawrence suffered from debts and alcoholism and his world-wide reputation has suffered over time. He remains a significant minor figure in British art but is known only by specialists in America. The National Portrait Gallery in London, England, has many of his works in their collection and even has 13 portraits of the portrait maker, including his death mask.

I remember seeing Lawrence's work for the first time at the PMA. I knew nothing about Lawrence, but the way he painted textures of clothing was incredible, the closest I’d ever seen to John Singer Sargent in terms of making paint actually look like silk or fabric. The portrait of Master Lambton above shows some of the amazing facility Lawrence had with shimmering textures. But it was the lifelike eyes, almost moist with excitement, that really held my imagination and drove me to learn more about this painter. You can almost see his subjects think and breathe beneath their 19th century accoutrements, as if they could still speak to you now.

When my wife and I visited the Louvre, we were lucky enough to find more of Lawrence’s work there, tucked away in the 19th century British collection, far from the maddening crowds racing to see the Mona Lisa. On one hand, I wish more people could see the greatness of this long-forgotten painter. But, on the other hand, it was nice that afternoon in Paris to have such a great secret to ourselves.
UPDATE: Ed Pettit of The Bibliothecary Blog pointed out to me a New York Review of Books review (unfortunately, pay per view) of a new book on Lawrence. In comments, Ed also recommends a Lawrence painting at the LaSalle University Art Museum right here in Philadelphia. Thanks, Ed!
Posted by Bob at 4:49 AM

My favorite painting at La Salle University's Art Museum is aportrait by Lawrence of Louisa, Sixth Countess of Sandwich. The painting is entitled "Hope" and you can see a small, not very good image at the La Salle Art Museum page:
http://www.lasalle.edu/museum/merchandise.php?category=postcards

Hope is the 4th from the left. Click on it to make it a little larger.