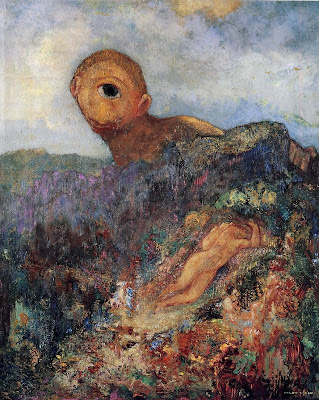 Odilon Redon, one of the strangest and most disturbing early modernists, celebrated his birthday yesterday, being born on April 22nd, 1765. (Redon’s Cyclops is above and his Red Boat With Blue Sail is below.) 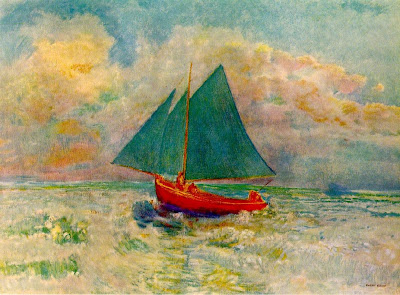 The fact that Redon studied under Jean-Leon Gerome in Paris in 1864, right around the same time that American realist painter Thomas Eakins studied under Gerome, is just one example of how before his time Redon was. Whereas Eakins took from Gerome his scientifically exact approach to art, Redon embraced Gerome’s exotic side and followed it to a phantasmagoric extreme.

Redon’s illustrations of Poe’s works are representative of his fantastic images taken from literature. Smiling and crying spiders, hot air balloons resembling huge eyeballs, and a cactus man are only some of the children of his fevered imagination.

Seeing Redon’s work at the Musee D’Orsay in Paris was one of the highlights of that collection for me. Redon’s pastels rival those of Edgar Degas and Maurice Quentin de La Tour for technique and often surpass them for sheer imaginativeness.

It wasn’t until the famous 1913 Armory Show in New York that Americans first saw Redon, but he remains a forgotten master.
Posted by Bob at 6:06 AM