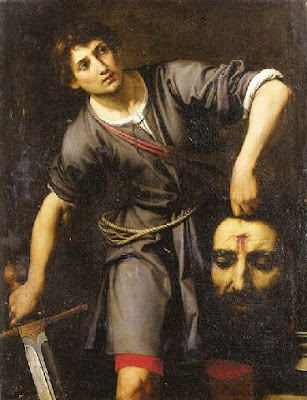 Taking identification with the victory of David a little too far, a 22-year-old man with a history of mental illness last week attacked a painting in the Milwaukee Art Museum, aiming his blows at the decapitated head of Goliath in a horrible act of piling on if there ever was one. The Triumph of David by Ottavio Vannini (shown above), valued at $300,000 USD, was on loan to the museum.

Rembrandt’s ’s Night Watch still holds the record for most attacks, I believe, facing crazed knife-wielders twice and a sulphuric acid sprayer once in the last century.

The king of art vandalism, however, remains Laszlo Toth, who, believing himself to be Jesus Christ, took a sledgehammer to Michelangelo’s Pieta in 1972, breaking off the Virgin Mary’s arm at the elbow, taking a chunk out of her nose, and chipping one of her eyelids before guards could arrive. Fortunately, conservators were able to restore the Pieta, which now sits behind bulletproof glass inside St. Peter’s in Rome, far beyond the reach of mistaken messiahs and other sundry madmen.

(Menachem Wecker at Iconia interviews a conservator about how the museum will go about repairing Goliath’s head.)
Posted by Bob at 6:07 AM