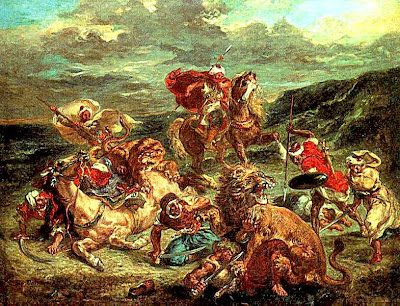 Eugene Delacroix, one of the most beloved and influential painters France has ever produced, was born on this date in 1798. The sweeping Romanticism of Delacroix’s work resounds throughout art history, taking the lessons of masters such as Peter Paul Rubens from the past and reaching forward with his wild freedom into modern art through his influence on figures as diverse as Edouard Manet and Pablo Picasso. Delacroix’s fevered interpretation of The Lion Hunt from 1861 is above. 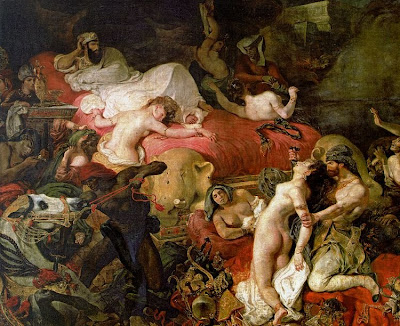 I remember seeing the 1998 PMA exhibit Delacroix: The Late Work and coming away amazed at the range of his work. Even the floral still lives he did vibrated with the same energy and imagination found in more exotic subjects such as Death of Sardanapalous (above). 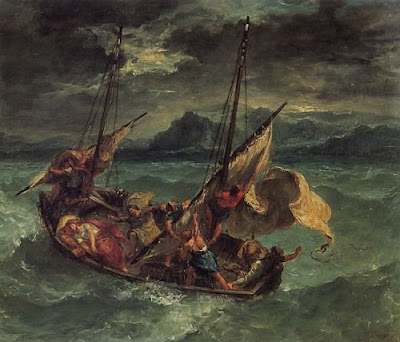 I believe that Delacroix’s Christ on the Sea of Galilee (above) is the finest approach to that subject since Rembrandt’s. Both artists convincingly recreate the danger of the tempest while beautifully expressing the psychology of the apostles purely by physical gesture. 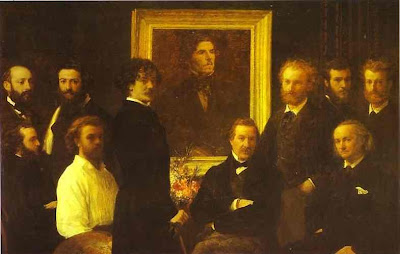 Delacroix may be the subject of the finest tribute painting ever done, Henri Fantin-Latour’s Homage to Delacroix (above). Seeing this at the Musee D’Orsay in person was a great thrill for me, as I’ve seen it so many times in reproduction that I can point out who’s who. Fantin-Latour places himself to the left of the portrait of Delacroix in a white shirt. Standing just to the left of the portrait is curly haired James McNeill Whistler. On the other side of Delacroix’s portrait is the red-bearded Manet, to whom Delacroix’s view is directed, perhaps pointing to Manet as his choice for the new direction of French painting. To have included all of those influenced by Delacroix (Pierre-Auguste Renoir, Paul Cezanne, and Henri Matisse are just a few) would have been impossible.

(As I’ve said before, a visit to the Delacroix Museum in Paris is on my “before I die” list.)
Posted by Bob at 5:56 AM