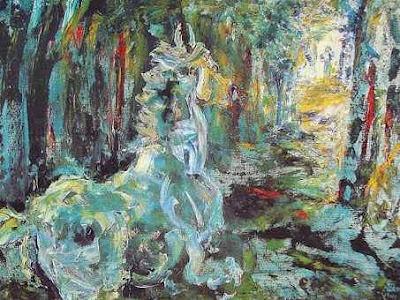 Via Art Knowledge News comes word of a Poets on Painters exhibit at the Ulrich Museum of Art at Wichita State University in Wichita, Kansas. This exhibit pairs up 20 contemporary artists with 20 contemporary poets, placing the words of the poet next to each work.

I’ve been struck recently by the strength of the intersection between poetry and the visual arts. A friend passed on to me Poets on Painters: Essays on the Art of Painting by 20th Century Poets, edited by J.D. McClatchy. McClatchy’s collection contains art criticism by such poets as Wallace Stevens, William Butler Yeats, W.H. Auden, and Randall Jarrell, but the prose of each selection approaches poetry in level of sensibility as well as turn of phrase. (For the Road, by Jack Yeats, brother of W.B. Yeats, is above.)

William Carlos Williams’ appreciation of American folk art painted “in the American grain” placed folk art in a new light for me. D.H. Lawrence’s lust for the lusty in modern art reminded me of Samuel Taylor Coleridge’s lectures on Shakespeare’s Hamlet: you come away knowing more about Lawrence and Coleridge than about modern art and Hamlet. Stevens’ essay contains the same precise, complex thinking found in his poetry. “The world about us would be desolate except for the world within us,” Stevens says. “There is the same interchange between these two worlds that there is between one art and another, migratory passings to and fro, quickenings, Promethean liberations and discoveries.” Stevens and the other poet-critics in this collection help capture these Promethian sparks of insight into art so that lesser minds such as mine can only marvel and learn.

At the heart of this interchange between poetry and paint is envy. “The writer will always envy the painter,” James Merrill begins his essay. “And not the writer alone; it is the rare person who can look at anything for more than a few seconds without turning to language for support, so little does he believe his eyes.” Merrill sees the envy flowing one way, but so many painters have looked to literature for inspiration (even Michelangelo wrote poetry), that it’s clear that the feeling seems very, very mutual.
Posted by Bob at 5:51 AM

Hi there, I was wondering if you could help me. I am looking for a print of For the Road by Jack B Yeats and I can't find any sellers anywhere that do it. In fact, this image above is the only one I could find online. Do you know who I would contact to get a print? Any help would be appreciated.