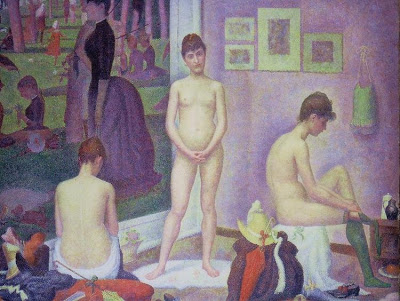 Another great step towards freeing the collection at the Barnes Foundation, which has been held virtual hostage in Lower Merion, Pennsylvania, since the days of Dr. Albert C. Barnes, was made with the announcement of a $5 million USD grant from the Andrew W. Mellon Foundation to support scholarly activity at the Barnes Foundation as it makes its move to a new location in Philadelphia. (Georges Seurat’s Models, which shows the more famous A Sunday Afternoon on the Island of La Grand Jatte in the background and is in the Barnes collection, appears above.)

One of my many frustrations with the Barnes Foundation (and there are many, such as the underappreciated role of William Glackens) has always been the lack of scholarly publications. I have their Great French Paintings from The Barnes Foundation: Impressionist, Post-impressionist, and Early Modern, but that barely covers the depth and breadth of the collection. Opening the doors to scholars who can, for example, examine the connections Barnes saw between the work of El Greco, whom Barnes collected, and modern painters, can only draw more attention, scholarly and amateur, to the collection.

Freeing the paintings of the Barnes Foundation from the tomb Dr. Barnes confoundingly devised for them in so many ways will benefit everyone—Philadelphia culturally and economically, as well as the art history field in general.
Posted by Bob at 5:42 AM