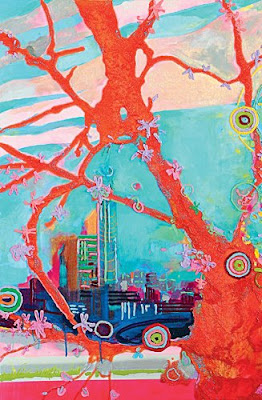 Taking to heart Alfred Jarry’s admonition to experience art in person more than in thought, I ventured out this week to the Bridgette Mayer Gallery to experience the current exhibit of works by young artist Ivan Stojakovic, “Global Nature.” (Stojakovic’s Neural Blossom diptych appears above [left half] and below [right half].) 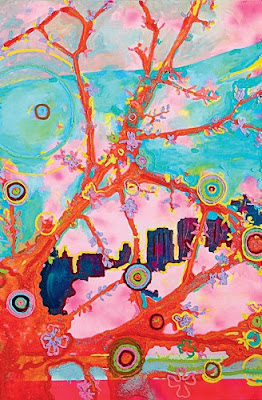 Perhaps I have too much Jarry and Thomas Chimes in my head right now, but I couldn’t help but connect them with Stojakovic as I walked through the gallery and took in all the color and textures of Stojakovic’s work (reproductions really don’t do justice to the impasto technique or the colors). Jarry would have appreciated the catholic approach to imagery and technique Stojakovic employs. Pieces of technology, such as computer boards and fractal images, as well as biological forms, such as magnifications of cell structures, appear throughout. Thick ropes of acrylic paint comprising Net I and Net II (featured on the exhibit catalogue cover) mimic electrical wires.

At the same time, Stojakovic quotes elements of art history, such as Japanese woodcuts, as seen in the sprawling orange tree limbs covered in pink flowers networking across the two halves of Neural Blossom (shown above). Japonisme has intrigued Western artists since Edouard Manet, but Stojakovic modernizes it with acidic color, translating it into his personal, technicolor idiom (an image of furiously firing, "blossoming" neurons) while retaining the art history allusion. Jarry must be smiling down on this joyful celebration of imagery and color.

Chimes came into my mind because of this shared use of technological markings to create a private language. The contrast between Chimes almost purely white works at The Locks Gallery and Stojakovic’s color leaping from the walls of the Bridgette Mayer Gallery, only a few blocks away from one another in the historic area of Philadelphia, disguises their similar aims. Chimes consciously uses Jarry’s idea of ‘Pataphysics, i.e., an imaginary “science” playfully using the trappings of technology, but Stojakovic may be a subconscious ‘pataphysician. Of course, the true message of Stojakovic’s work may be that we are all ‘pataphysicians, willingly or unwillingly imbibing the technological flow surrounding us while hoping to retain the color and texture of imagination that gives life meaning.
Posted by Bob at 5:36 AM