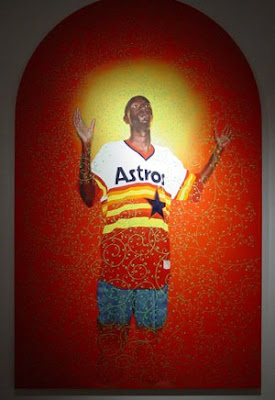 The Art Newspaper currently has an article about the latest trends in museum acquisitions. New media, such as film, video, and mixed media, are all on the rise, reflecting new technologies available to the modern artist. Old media, and I mean really old media, such as Greek and Roman antiquities, is on the downslide, mostly from the recent controversies over the home countries trying to reclaim their stolen heritage. But what really interested me about the article was their listing of the two hottest artists museums are pursuing, one name familiar and one name not: Jasper Johns and Kehinde Wiley.

Perhaps more than any other modern artist, Johns’ art suffers in reproduction. You really need to see the American flags, maps, and other encaustic works personally to appreciate the textures. Personally, I find the battle between Johns and Robert Rauschenberg for “best living American artist” in the minds of museum acquisition directors fascinating. Rauschenberg’s appeal has always eluded me, probably from my own lack of understanding, but Calvin Tomkins’ Off the Wall: A Portrait of Robert Rauschenberg provided a lot of insight into Rauschenberg’s work as well as his changing relationship with Johns.

I honestly had never heard of Kehinde Wiley, and really wonder why not. Fortunately, through the miracle of Google, no artist is more than a few clicks away today. Like any good modern artist, Wiley has his own homepage. Unlike most modern artists, however, Wiley freely steals from the past, specifically the Renaissance style, to present his own urban, hip hop imagery. The incongruity between the two styles, one classically artistic and one modernly commonplace, reinvents the people in Wiley’s work and allows a new audience to see hip hop in a new light. (I confess to little to no knowledge of hip hop culture. I don’t “roll like that,” he said in an old and Caucasian voice.)

Wiley’s Passing/Posing (St. Clement of Padua) (at the top of this post) transforms a circa 1970s Houston Astros’ jersey-wearing African-American man into a religious icon not only by his pose but also by the colors of the painting, blending the familiar festish for “old school” sports uniforms with the warm light of Renaissance saints. The halo-like sunburst around the figure’s head echoes the sunburst on the Astros jersey, an imaginative repurposing of modern design to mimic Renaissance iconography. (More paintings are available here from a 2005 Brooklyn Museum exhibit of Wiley’s work.) 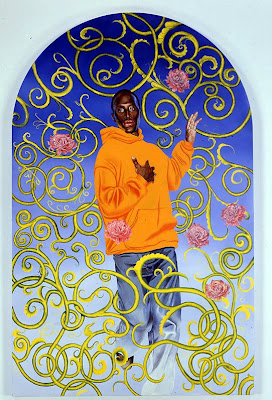 Wiley’s Passing/Posing (Assumption) (above) draws parallels between the baggy clothing popular in hip hop style with the robes and monkish cowls of Renaissance saints. This figure could easily be a modern-day St. Francis of Assisi, but with the flowing vines and pink flowers of bucolic nature acting as a contrast to the youth’s darker urban reality. Perhaps this is an assumption into the afterlife, with the natural imagery providing a peace that most African-American youth never know today.

Wiley’s work disrupts many of the common assumptions mainstream culture has of hip hop culture and African-American youth. I believe that, unlike the art of many other African-Americans who have quickly risen to fame (Jean-Michel Basquiat comes quickest to mind), Wiley’s works have the staying power to become valued permanent acquisitions.
Posted by Bob at 7:00 AM