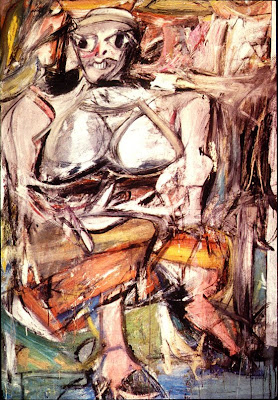 William de Kooning, chief rival Abstract Expressionist to Jackson Pollock, was born on this date in 1904. The handsome Hollander (played by Val Kilmer in the movie Pollock) struggled with alcoholism most of his life before succumbing to Alzheimer’s disease in 1997. He titled one of his paintings Whose Name Was Writ in Water after the words John Keats requested as his epitaph. Although de Kooning’s life was nearly four times as long as Keats’ short existence, the sad nature of his lost memory and spirit to disease shrouds his life with a similar fragile fleetingness.

de Kooning can be a hard artist to love. His misogyny, as seen in his Woman paintings (Woman I is above), takes away from the rest of the great experiments in color and line his abstract expressionist works represent. But, whereas Pollock’s paintings were all rhythm and pace as he performed his heavy booted ballet around the periphery of his canvases, de Kooning’s paintings are beautiful in gesture even when violent, a clash of colors culminating in a unified whole that defies conscious construction. de Kooning’s drunken, lusting Id saturates each stroke, for good and for ill.

As his Alzheimer’s disease took its toll, his style changed into something simpler, more abstract, free of this misogyny but also free of the bold gestures of who he was in toto. Robert Rauschenberg’s Erased de Kooning, a drawing by de Kooning given to Rauschenberg to be erased and then exhibited as conceptual art, symbolizes for me the “erasure” of one of the great artistic visions of the 20th century.

(de Kooning: An American Master, by Mark Stevens and Annalyn Swan is essential reading for anyone wanting to know more about de Kooning.)
Posted by Bob at 6:33 AM