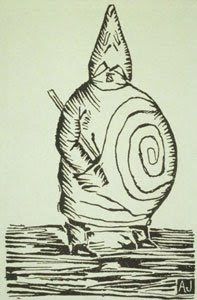 Anyone who came away from the Thomas Chimes exhibit at the PMA wanting to learn more about Alfred Jarry should read Jill Fell’s book, Alfred Jarry: An Imagination in Revolt. Fell gives a complete picture of Jarry’s influence as an author and artist, but also as an unconventional art critic.

The poet and art critic Guillaume Apollinaire judged Jarry’s woodcuts (his Veritable Portrait of M. Ubu is above and his Saint Gertrude is below) to be the finest examples of the full range of Jarry's artistic talent. Jarry credited Goya’s Disasters of War, Gustave Dore’s illustrations of Dante’s Inferno, Odilon Redon’s monstrous imagery, and William Hogarth’s satires as influences on his work. In turn, the “psychological primitivism” (Fell, p. 84) of Jarry’s woodcuts would influence the German Expressionists, Der Blaue Rieter group, and Die Brucke group. 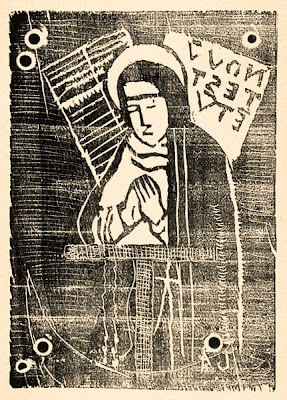 Such influences gave Jarry little anxiety in his use of them. “A really original brain works exactly like an ostrich’s stomach,” Jarry wrote. “Everything suits it, it pulverizes pebbles and mangles pieces of iron… A great personality does not assimilate anything at all, he de-forms it; better still, he transmutes it, in the upward direction of the hierarchy of metals. Finding himself in the presence of the unsurpassable—of the masterpiece—he does not produce an imitation, but a transposition.” (Quoted in Fell, p. 76) Jarry performed an act of alchemy in his work, taking all the elements of art, especially images of cruelty, such as those found in Goya and Dore, and creating something new and his own.

In both his artwork and his art criticism, Jarry placed a priority on living over thinking. In his art, Jarry strips away social, academic, and historical conditioning, bringing in high and low, beautiful and ugly, rudely (to most eyes) juxtaposing elements the same way that the Surrealists, who count Jarry as a predecessor, later would. I’ll never forget the scene with the razor and the eyeball in Luis Bunuel and Salvador Dali’s short Surrealist film Un Chien Andalou. Jarry assaulted the eye and the imagination in the same unforgettable way. “Beauty, for Jarry, lay in the shock of the unexpected,” Fell writes. “Beauty had to be allowed to escape moral categorization and to encompass the cruel, the evil, and the monstrous.” (Fell, p. 137)

In his art criticism, Jarry always stressed actually seeing art for yourself over just reading or thinking about it. Jarry championed obscure, solitary, outsider artists over mainstream, established artists in his criticism, forever striving for new innovations. Paul Gauguin, Henri Rousseau, Ferdinand Hodler, Emile Bernard, and the members of Les Nabis group are only some of the artists Jarry knew and promoted in his work. An anti-theoretical critic, Jarry used a “paranoic-critical method” (according to Andre Breton) to guide the viewer past the superficial lines of an image and through to the underlying shapes within. Jarry’s criticism also took the form of poems (specifically about Gauguin’s Tahitian paintings) and a novel (in which Gauguin, Bernard, and Aubrey Beardsley each preside over a country reflecting the principles behind their art) in an attempt to escape conventional criticism and achieve something closer to art itself.

Jarry’s ideas serve today as a reminder that, although both are important, living should always take priority over thinking. Experiencing life, in all its beauty and ugliness, should always be more important than thinking about it (or reading blogs about it).
Posted by Bob at 5:43 AM