Beuys Will Be Beuys 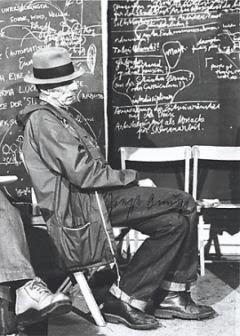 Joseph Beuys, one of the most unique figures in 20th century art, celebrated a birthday last Saturday, May 12th. Born in 1921, Beuys played an instrumental role in the development of performance art as we know it today. For that, he’s both an intriguing and an exasperating artist, depending on your point of view. His dedication to teaching and fostering young artists in his native Germany remains unquestioned. (An image of Beuys teaching in his trademark felt hat appears above.) 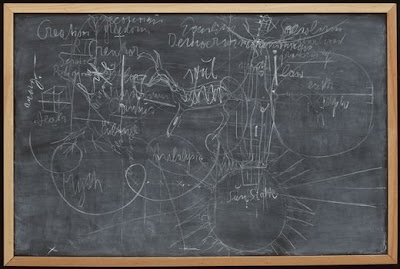 Beuys lectures were performance art all by themselves. Above is an image of a blackboard on which Beuys diagrammed the serpentine workings of his mind. This board itself now appears at the MoMA as Untitled (Sun State). Everything Beuys did or touched became art in the self-constructed persona he forged.

Beuys fought in the German Luftwaffe in World War II until his bomber was shot down in the Crimea in 1944. In reality, Beuys received care in a German hospital, but in his self-constructed mythos, this crash and his recovery became the origin of his new artist persona. Beuys claimed that Tartar villagers found his wrecked plane and pulled him out, barely alive. These villagers then covered his body in lard and felt for warmth, nursing him back to health.

(The indie comic Cat and Girl pokes fun at Beuys’ creation myth while describing their own creation in flashback. Cat and Girl’s plane crashes into a frozen wasteland, where they are rescued by Eskimo-looking locals. “Lovely lard,” says an appreciative, recovered Cat. “That’s not what happened at all,” argues the Girl. A Zombie Joseph Beuys enters the final panel to say, “Who are you to question Zombie Joseph Beuys?” Zombie Joseph Beuys appears in many Cat and Girl strips, and even received their endorsement for President.) 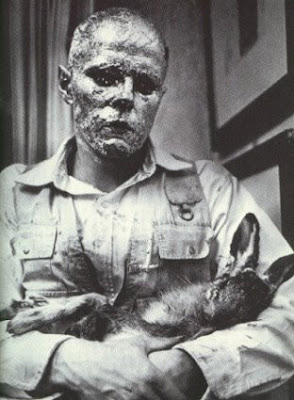 Beuys opened many doors for the weird and bizarre in performance art. In his How to Explain Pictures to a Dead Hare (above), Beuys walked around a gallery, his face lathered with honey and gold leaf, while carrying a dead hare, to whom he would whisper explanations of the drawings. Poking fun at both critics and the gallery “experience,” Beuys ruffled feathers but at the same time brought fresh air into the sometimes stuffy world of exhibits.

In a move that Suzi Gablik would praise as “reconstructive postmodern practice,” Beuys initiated the 7,000 Oaks project in Kassel, Germany in 1982, which aimed at ultimately planting 7,000 oak trees worldwide, each with an accompanying stone column.

Some critics attack Beuys with charges of glossing over his and Germany’s Nazi past by creating his personal mythos of lard and felt, but I think that Beuys simply took the normal self-mythologizing of the artist to an extreme. As the art critic Harold Rosenberg said, “Whoever undertakes to create soon finds himself engaged in creating himself. Self-transformation and the transformation of others have constituted the radical interest of our century, whether in painting, psychiatry, or political action.” This “radical interest” of Beuys’ 20th century forced him to create a new self in the name of his new art.
Posted by Bob at 5:51 AM

Good choice of images and words, begins to scrape the surface.. I found this post through writing my own small entry on Beuys(blackboards specifically). Glad I saw this after it was written, I might have otherwise "borrowed".