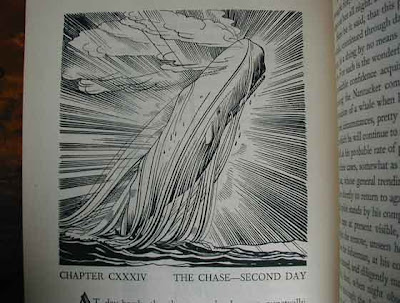 Rockwell Kent, American illustrator, author, and political activist, was born on this date in 1882. Kent’s illustrations for Herman Melville’s Moby-Dick in the 1920s helped in recovering that lost masterpiece for a new generation. Kent’s glorious image of the White Whale rising from the depths in Chapter CXXXIV, The Chase—Second Day, appears above. 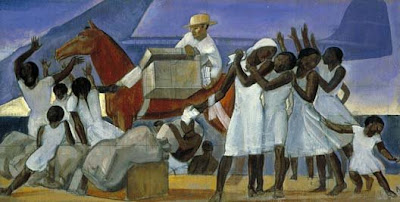 Kent designed illustrations for such publications as Vanity Fair, Harper’s Weekly, and Life in the 1920s, earning a reputation as the Jazz-Age Hogarth. A believer in transcendentalist philosophy and a mystic, Kent traveled around the world and interacted with many different cultures. In 1937, the United States Postal Office hired Kent to paint a mural for their headquarters in Washington, DC. In that mural, Mail Service in the Tropics (above), Kent hid a political message encouraging Puerto Rican independence from the United States. (The message was written very small and in a dialect of Eskimo Inuit [which Kent had picked up during his travels in Alaska], so good luck finding it in the picture. I’d love to know how they found it. I’m picturing smirking Eskimos standing in front of the mural being asked “What’s so funny?”) 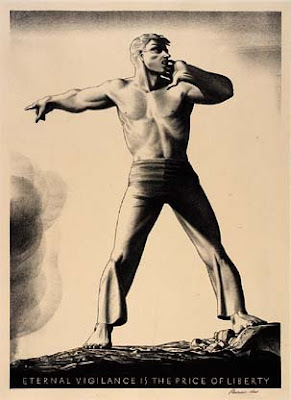 That political action and Kent’s membership in the Socialist, pro-Communist International Workers Order earned him the wrath of McCarthyism in the 1950s, which took a toll on his career and subsequent artistic reputation. I remember seeing a display of Kent’s work at the PMA years ago and wondering at the crisp lines and bold expressiveness of the figures, such as in his Eternal Vigilance Is the Price of Liberty above. I’ve always seen Kent’s figurative work as the most impressive expression of transcendentalist principles in visual art. I only wish he had illustrated more of the works of the 19th century American Renaissance. 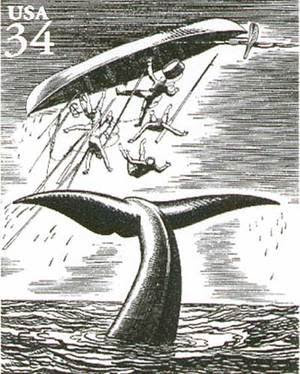 Kent’s reputation has recovered some in the past few decades, as the madness of McCarthyism has been recognized for what it was. Ironically, in light of the Post Office mural fiasco, Kent received the honor of having his work appear a 34-cent postage stamp in 2001 (above) as part of a series honoring American Illustrators. As someone who has read every novel and most of the poetry Melville ever wrote, I’ll always appreciate the role Kent played in bringing that lost genius back to American culture.
Posted by Bob at 5:52 AM