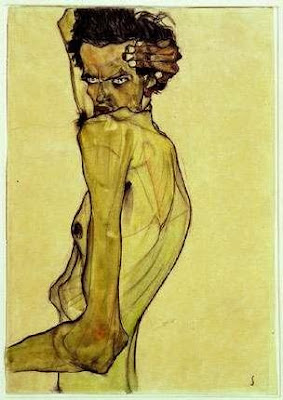 Egon Schiele, one of the strangest and most tragic figures of early 20th century art, began his short but eventful life on this date in 1890. As Arthur C. Danto says in his appreciation of Schiele titled “Live Flesh,” it is hard to label Schiele as an Expressionist because his art is so very, very unique. Schiele’s Self-Portrait with Arm Twisted Above Head at the Neue Galerie in New York appears above. 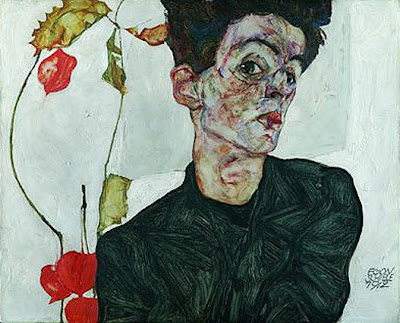 Schiele sought out Gustav Klimt as a mentor in 1907, seeking someone who could appreciate his unique draftsmanship. Klimt recognized Schiele’s talent, but could do nothing to insulate him from the criticism and public disdain his frank appreciation of sexuality would bring him. In 1912, Schiele was arrested with the charge of seducing an underage girl, perhaps one of the many teenage girls he used as models. The judge dismissed that charge, but instead jailed Schiele for hanging his works where impressionable eyes could see them. The judge even burned one of Schiele’s works right there in the courtroom. Despite these difficulties, Schiele maintained his artistic integrity and fostered an outlaw persona, captured in the many self portraits (such as Self Portrait With Chinese Lanterns above) featuring his trademark shock of black hair and befuddling expressions. 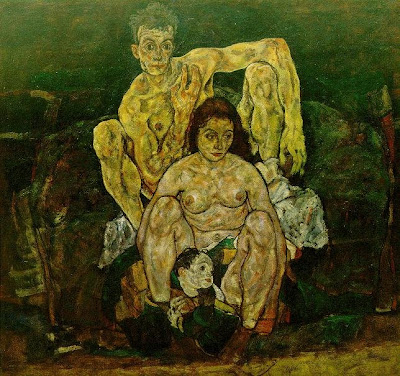 Schiele married in 1915 and was shipped off to World War I a mere 4 days later. He survived the conflict and his art began to make inroads into the culture. Unfortunately, the postwar Spanish Flu Epidemic, which claimed 50 to 100 million lives worldwide, struck down his wife, who was 6 months pregnant, in 1918. Heartbroken, Schiele succumbed to the same disease only 3 days later. He was only 28 years old. Schiele’s painting The Family (above) shows him and his wife nude with a small child in what is certainly the oddest family portrait ever painted. Perhaps the child in this painting was Schiele’s conception of the child they never had. If it is, it would be just another haunting image in the collection of this hauntingly beautiful artist.
Posted by Bob at 7:07 AM