An African-American in Paris 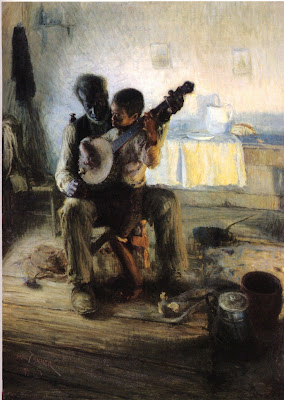 Henry Ossawa Tanner, the first African-American painter to gain an international reputation, was born on this date in 1859. Tanner spent most of his life in Paris to escape the racism he found in America and died there in 1937. The Banjo Lesson, one of Tanner’s many paintings depicting the life of African-Americans in the late 19th century, appears above. 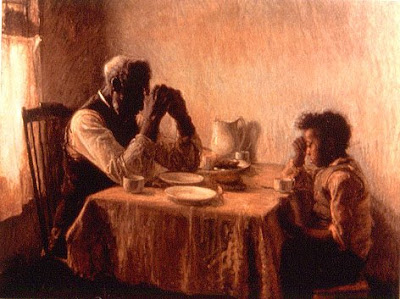 Tanner studied under Thomas Eakins at the PAFA from 1879 through 1885. Eakins’ influence shows through clearly in how Tanner approached his subjects in a realistic manner. Tanner’s studies in Paris also helped shape his painting technique. In 1891, Tanner briefly returned to Philadelphia, where he painted The Banjo Lesson and similar scenes, such as The Thankful Poor (above), which was purchased by the comedian Bill Cosby in 1981 for $250,000 USD. Sadly, despite his obvious talent, Tanner felt unappreciated by the American arts community and returned to Paris to stay. 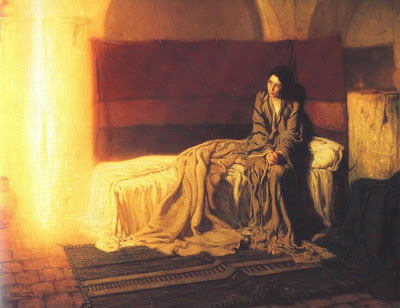 Tanner enjoyed the more liberal racial attitudes of Paris and eventually married Jessie Macauley Olssen, a white musician. In Europe, Tanner abandoned his scenes of African-American life and devoted himself to biblical paintings, such as The Annunciation (above), in which Tanner’s wife served as the model for the Virgin Mary. I’ve seen The Annunciation many times at the PMA and always wonder at the combination of homely realism and the fantastic depiction of the Angel Gabriel at left as a being of pure light. I’ve always seen Tanner’s religious works as a great “what if”: What if Eakins had the same depth of religious feeling that his student Tanner had? Fortunately, Tanner’s works more than suffice.
Artists such as William H. Johnson sought out Tanner in Paris as a forerunner and example of what an African-American artist could be, especially one who has chosen the life of an expatriate. Tanner continues to serve as an example to African-American artists and as a reminder of the price America has paid for its own intolerances.
Posted by Bob at 5:45 AM

Vincent. My beloved artist of all time :) joga