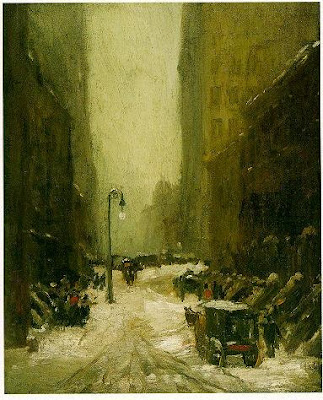 Emma Goldman, early feminist and anarchist , once called painter Robert Henri “an anarchist in his conception of art and its relation to life.” Henri, teacher and humanist committed to the depiction of realism in all its gritty detail, such as his Snow in New York (1902) above, was born on June 24, 1865.

Henri served as a focal point for the Ashcan School (aka, “The Eight”), which shared and expanded Henri’s faith in art’s ability to depict the daily existence of the urban poor in America and awaken society’s conscience to their plight. Works such as Cumulus Clouds, East River (1901-1902) (above) make this impoverishment beautiful in its own stark way. Henri took his earlier love for the Impressionist style and Impressionist landscape and abandoned it to better depict the economic realities around him. Henri’s students, such as Edward Hopper and Rockwell Kent, would take his artistic and political beliefs and mold them to their own artistic visions. 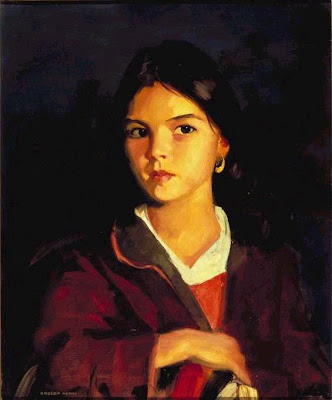 After 1909, Henri’s color palette took a brighter turn as he moved away from the social concerns of the Ashcan School towards a more modernist technique. During this period, Henri painted many wonderful portraits of children, such as Bernadita (1926) (above). I’ve always loved Henri’s depictions of children, which seem to me the logical extension of his humanism. As South African Nobel Peace Prize winner Nelson Mandela once said, “There can be no keener revelation of a society’s soul than the way in which it treats its children.” The same warmth and compassion Henri brought to the dark, cold cityscape shines in the reflected eyes of the children of his later portraits. Robert Henri, a great teacher in his day, still has something to teach us today about what our society should be.
Posted by Bob at 11:08 AM