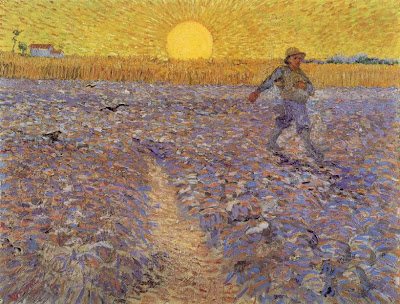 Watching the first night of Simon Schama’s The Power of Art series on PBS last night fulfilled all my expectations. I’ve only watched the Van Gogh segment so far, but that’s enough for me to know that Schama’s brought the same insightful, pyrotechnic approach to this project that he’s brought to all his past performances. Having finally seen the program, I can finally respond with some confidence to TIME Magazine’s art critic Richard Lacayo and his charge of Schama’s Power as “Overpowering.”

Lacayo half-praises the project with the disclaimer that it’s “a bit of an oddball production” in places. He bemoans the use of filmed dramatizations throughout. I agree that filmed recreations have become the bane of documentary filmmaking today (just try and watch anything on the puerile History Channel without rolling your eyes at the bad acting and even worse writing). However, as Lacayo admits, the performance of Andy Serkis, the actor who played Gollum in The Lord of the Rings film trilogy, as Van Gogh is amazing. Serkis recreates Van Gogh in all his gentleness and mania, bringing to life the insatiable bookworm, the spiritual visionary, and the tortured invalid with equally brilliant facility. (His nuanced readings of passages from Van Gogh’s letters make me long for an extended audio book of Serkis channeling Vincent’s innermost thoughts.) Seeing Serkis makes me wonder how there can be such a drop-off in quality, as Lacayo suggests, but he’s seen the subsequent episodes and I haven’t, so I’ll withhold judgment there.

I take the most offense in what Lacayo sees as the “overpowering” aspects of Schama’s presentation. Lacayo reels back from Schama’s “strident vocalizing” in his narration. Watching and listening to Schama, I didn’t see as much stridency as one expert’s enthusiasm for his subject. (Americans may also be taken aback by people actually enunciating their words rather than chewing them, as we colonists have done to the mother tongue.) Schama may declaim a bit too loudly, but Van Gogh’s life was lived loudly, vividly, and, yes, stridently. The “power” in The Power of Art comes across loud and clear in Schama’s voice, especially when he strides across the technicolor landscapes Van Gogh painted. Along with Serkis’ performance, Schama’s voice and physical presence in the natural surroundings and cramped alleyways of Van Gogh’s life bring the physicality of Van Gogh the artist and the man back to life with a, yes, overpowering immediacy even more striking due to the “museum-ization” of Van Gogh and all the other artists Schama celebrates in his series.

In The Power of Art, Van Gogh walks the earth again. Comparing Van Gogh’s Sower (above) to its inspiration, Jean-Francois Millet’s Sower, which Schama sees as “rooted to the ground,” Schama says of Van Gogh’s version that the sower treads “lightly, like Jesus upon the waters, on a bed of color.” Pithy, witty, and sometimes startling moments like these abound in Schama’s narration, re-materializing the ghosts of art history’s past, reconstituting and refreshing the power they once had over our imagination. If that seems overpowering, then all the better.
Posted by Bob at 6:52 AM

did they mention japan?

Not that I recall. The focus was mainly on the later part of Van Gogh's life rather than any look into influences, etc. I haven't read Schama's book of "The Power of Art" yet, but I'm interested to see if he makes any mention of Van Gogh's love of Japonisme there.

that bugs me. i mean, it was not just an influence or love, it was an essential part of his work after a certain point

i get too annoyed to watch these shows by experts ;^)