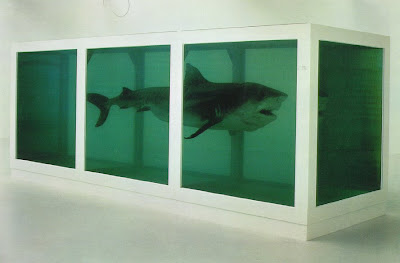 Damien Hirst, the best-selling, controversial, and quite often repugnant British artist, celebrated his 42nd birthday yesterday, June 7th. Famous for his 14-foot-long tiger shark preserved in formaldehyde titled The Physical Impossibility of Death in the Mind of Someone Living (above), part of his larger Natural History series, Hirst has been making more enemies and more money (the shark sold for $12 million USD in 2004) than any other living artist not named Jasper Johns. 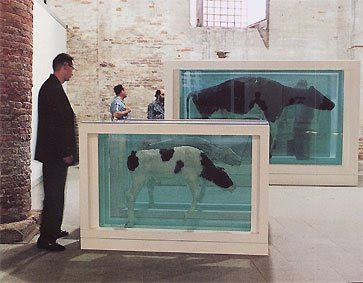 Hirst won the Turner Prize in 1995 at the height of his bad boy days. Bringing a Punk Rock sensibility to fine art, Hirst used his obsession with death to create a lucrative splash in the art world. Although he has worked in other media, Hirst’s Natural History works dominate any conversation of the artist. Above is an image from his Mother and Child Divided, which presented a cow and calf each cut in half and placed in a glass case. As revolting as that may sound, it was nothing compared to his Two F*cking and Two Watching, which featured a rotting cow and bull and was banned from exhibition in New York City for health code violations. 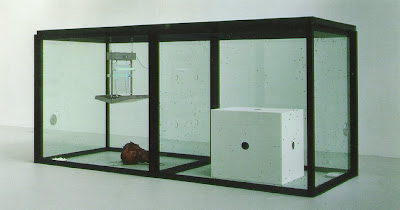 Another interesting, if unattractive piece by Hirst, A Thousand Years (above), tries to recreate the entire cycle of birth and death within a glass-encased environment. Maggots breed in the white box at right and turn into flies, which fly over to feed on the severed cow’s head on the left. Some of those flies then die in the bug zapper above the cow’s head, while others live on to lay eggs and continue the cycle—a perpetual revulsion machine in the form of a microcosm of the larger cycle of life.

As much as I appreciate the iconoclastic, breaking the boundaries theory behind Hirst’s work, I have trouble bringing myself to accept exactly how far he is willing to go. His remarks on the first anniversary of the September 11th attacks simply cannot be fathomed. “The thing about 9/11 is that it's kind of like an artwork in its own right,” Hirst said. “Of course, it's visually stunning and you've got to hand it to them on some level because they've achieved something which nobody would have ever have thought possible—especially to a country as big as America. So, on one level they kind of need congratulating, which a lot of people shy away from, which is a very dangerous thing.” (BBC video of his remarks is here.) If Hirst could look at that sight of death and come away with some insight other than finding it “visually stunning,” perhaps I could find some value in his work, believing that there was a message he was trying to convey. Unfortunately, his 9/11 remarks displayed the vacuum at the heart of his work and, perhaps, at his own emotional center. Nihilism may sell for now, but meaning and, if I may be naïve, hope are better long-term investments.
Posted by Bob at 5:43 AM