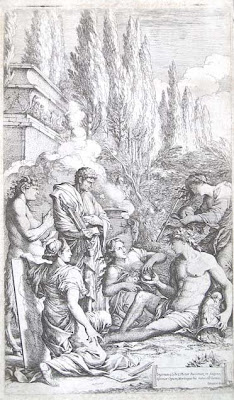 How could you not love an artist who could title a work in praise of his own genius? The Genius of Salvator Rosa (above) pays tribute to its maker, Salvator Rosa, born on June 20, 1615. Painter, musician, poet, playwright, and actor, Rosa even fit in some insurrectionist mayhem in his busy and colorful life. (A discussion of the symbolism of Rosa’s Genius is here.) 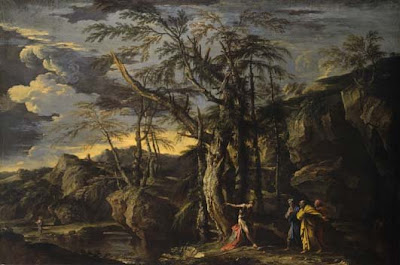 Rosa knew and was influenced by the two premier French landscapists of the 17th century, Nicolas Poussin and Claude Lorraine. Despite these influences, Rosa’s landscapes have a darker, more sinister feel to them, as in his Landscape With St. John the Baptist Pointing Out Christ from 1655-1660 (above). As psychologically penetrating as Poussin could be, Rosa strikes perhaps an even deeper note through his troubled scenery. Or perhaps I’m just conditioned to see greater psychological depth in the proto-Romanticism struggling to be born here. Today, Rosa stands more as a transitional figure rather than as one of the standouts of the 17th century, neither excelling in the visual language of his time nor developing enough of the Romantic visual lingo of the future to be a true precursor. 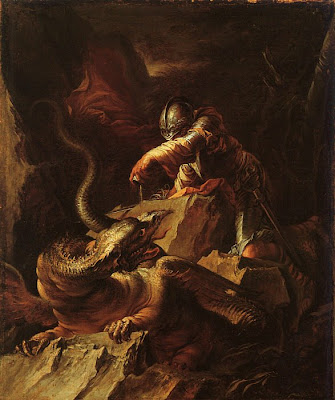 One easily sees how Rosa influenced Henry Fuseli in such paintings as Jason Charming the Dragon (above). Rosa gets so close to the excesses of Romanticism that you wonder how he didn’t take that final step. In his personal life, Rosa took the ultimate step of joining the insurrection of Masaniello against Spanish rule in Naples in 1647 as part of the Compagnia della Morte, a company of painter-soldiers led by painter Aniello Falcone that roamed the streets of Naples stalking Spanish victims, even if they sought religious sanctuary. With that stroke of fate, Rosa joins Caravaggio on the short list of painters who wielded a sword as boldly as a brush.
Posted by Bob at 5:55 AM