Love Across the Easel 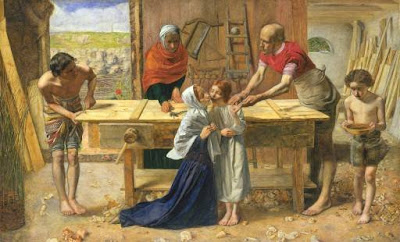 John Everett Millais, one of the founding triumvirate of the Pre-Raphaelite Brotherhood with Dante Gabriel Rossetti and William Holman Hunt, joined the living on this date in 1829. His beautiful, yet controversial Christ in the House of His Parents appears above.

The stark realism of Millais’ Christ in the House of His Parents offended many Victorian sensibilities, including that of Charles Dickens. Millais modeled the carpentry workshop in the painting after one he found in London. Equally, the characters in the painting are realistic depictions, free of the rarified treatment of religious subjects of the Renaissance, one of the goals of the Pre-Raphaelite Brotherhood. Millais’ commitment of realism brought him a step farther away from earlier movements and one step closer to modernism. 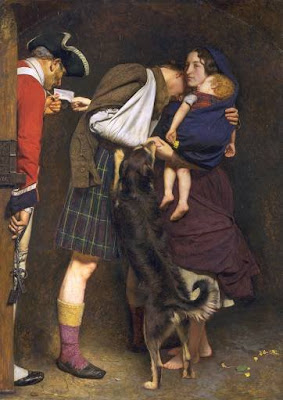 When I think of Millais, I always think of the romances hidden behind two of his famous paintings. I’ve mentioned before the story of his painting Ophelia, in which the model, Elizabeth Siddall, later became the wife of Rossetti. Millais himself found a wife in his model for The Order of Release (above). Millais’ model, Effie Gray Ruskin, however, was already married to his friend, the critic John Ruskin. Having fallen in love during the painting of The Order of Release, Millais and Effie arranged for her marriage to Ruskin to be annulled and eventually married and lived to have a houseful of eight children. The Order of Release referred to in the painting is that of a man released from jail thanks to a release gained by his wife, who greets him with their child and dog. It’s easy to also imagine that this painting was Effie’s “release” as well. A friend of mine and I always remark that there’s a great movie to be made of the lives and loves of the Pre-Raphaelites. Sometimes, it seems like it could be a miniseries.

With all those mouths to feed, Millais’ work took on a less ideological, broader appeal, which some applauded and others criticized. He modeled his new approach on the works of the Old Masters, especially Velazquez and Rembrandt. Paradoxically, with this movement towards the past, Millais took another step towards modernism, as this increased freedom led him to champion the works of Whistler (his earlier friend Ruskin’s nemesis). Millais stands as one of those great transitional artists of the Victorian period, with one foot in the past and one in the future, straddling the fault line of modernism.
Posted by Bob at 5:36 AM