In the companion catalogue to the exhibit, American Impressionists: Painters of Light and the Modern Landscape, Susan Behrends Frank, Assistant Curator at The Phillips Collection, pays tribute to and chronicles the journey of Duncan Phillips as he struggled to become an art critic and then amassed his renowned collection. William H. Gedts, perhaps the foremost authority on American Impressionism, provides additional context to Frank’s essay with his own essay exploring the larger reception of Impressionism in America. At the heart of both essays lies the story of the struggles Phillips and the American Impressionists had first to overcome resistance to Impressionism and then to decide what “American” Impressionism truly meant. From the very beginning, Phillips boldly hung works such as Ernest Lawson’s Spring Night, Harlem River (above) next to works by Claude Monet, the quintessential Impressionist for most Americans at the time, intentionally inviting comparisons with a faith that the Americans could hold their own and that America deserved a place next to Europe in the world of art. 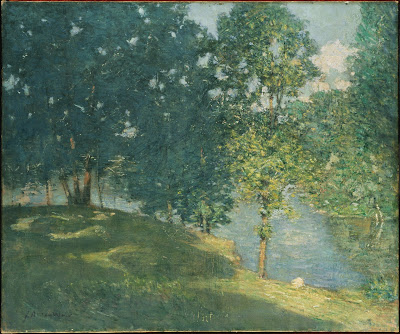 After seeing the collections of the Corcoran Gallery and the Smithsonian in Washington, DC, Phillips forged “an intensely self-conscious focus on the evolution of his collection in comparison… in the late teens,” Frank explains. Augustus Vincent Tack, a student of John Henry Twachtman, J. Alden Weir, and William Merritt Chase, became an early mentor to Phillips as he developed his critical eye and fostered contacts within American Impressionist circles. Late, Weir himself befriended Phillips and challenged him to hang the works of Americans beside those of the great European Impressionists. Through Weir’s influence, Frank explains, Phillips sought “American artists who, he believed, expressed spiritual truth as well as visual truth” in the vein of early visionaries such as George Inness, in contrast to “the theatrical vision” of the Hudson River School. Weir himself fit this bill nicely, as can be seen in his Afternoon by the Pond (above), an intimate scene of nature full of the silent, contemplative spirituality Phillips came to favor. 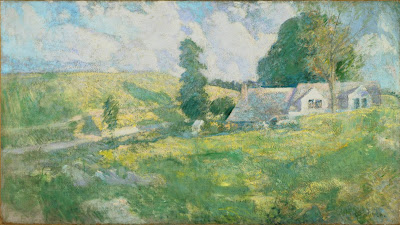 Another spiritual American Impressionist Phillips learned to love through Weir was Twachtman, whom Phillips always regretted never meeting himself. Works such as
Summer (above) inspired Phillips to say that in Twachtman “impressionism [had been] carried to the heights of spiritual expression.” “Few, if any, landscape painters were more sensitive or subtle,” Phillips wrote of Twachtman. Phillips passionately collected all the Twachtman paintings he could in the years before the opening of The Phillips Collection. 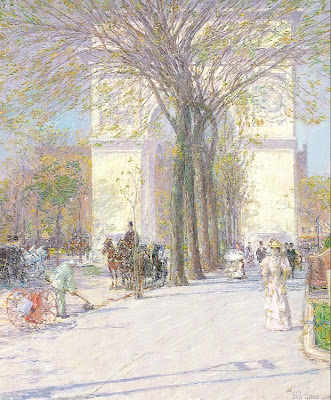 Sadly, Phillips relationship with Childe Hassam, the American Impressionist he ranked only behind Twachtman and Weir in greatness, was more stormy. Phillips continued to collect Hassam’s work, but never with the same enthusiasm as he brought to Twachtman and Weir’s art. In the late 1920s, Hassam and Phillips argued over the direction Phillips’ collection was taking, with Hassam denigrating Phillips' taste in art as “opinionated ignorance.” However, Phillips continued to value works such as Hassam’s Washington Arch, Spring (above), one of the highlights of The Phillips Collection and of all American Impressionism. 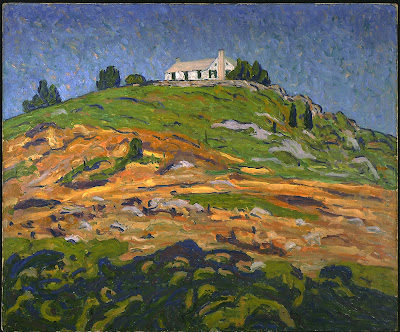 With the Wall Street Crash of 1929 and the subsequent Great Depression in the United States, The Phillips Collection fell on hard times and the market for American Impressionism slumped. At the 1913 Armory Show in New York City, where the works of Marcel Duchamp and Henri Matisse first exploded on the American art scene, the conservative aspects of Impressionism made the movement seem a thing of the past. Phillips himself began to collect more modernist works. In retrospect, he realized that his collection of American Impressionists helped pave the way for these modern movements. Works such as The Rise (above) by Allen Tucker, once called “The American Van Gogh,” signaled a new period for Impressionism in America.

[Many thanks to The Phillips Collection in Washington, DC for providing me with a review copy of the catalogue and the images from the exhibit.]
Posted by Bob at 6:08 AM

I have visited your blog and i wanted to leave a small message...just to say "hello from belgium".

Hello from America--Philadelphia, Pennsylvania, to be exact.

it's so bizarre what influences our taste in art, and how

why hasn't tack become as famous as all these other guys? i just discovered him this year

there are only a couple of hassam's paintings i've seen that i like--usually they're just too pointalistic for me, i guess, but i recently read somewhere about his antisemitism and that didn't help. though i guess degas' hasn't made me dislike him....

It is amazing how reputations go up and down, but that's the nature of all the arts. I guess what's truly amazing are those reputations that endure through all those ups and downs, i.e., Michelangelo, Picasso, and a handful of others.

Hassam is always a difficult person to think of as an Impressionist for me as well, mainly because I see him as a pointilist, too. His and Degas' antisemitism rankles me, too. I try not to think of it unless it comes across in the art, but biographical details like that always taint the work in some way.

hey bob--it's kinda cool that we both have similar referants but similar takes as well.