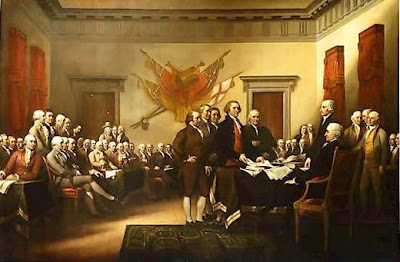 The premier painter of the American Revolution as most Americans remember it from the textbooks they used in the school, John Trumbull entered this world on this date in 1756. His most iconic American work, The Signing of the Declaration of Independence, one of several of his works hanging in the rotunda of the U.S. Capitol Building, appears above. 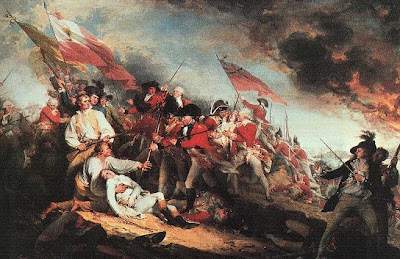 Trumbull fought for the colonists versus the British in the Revolution, rising to the rank of second aide-de-camp to General George Washington himself. He witnessed the Battle of Bunker Hill and painted The Death of General Warren at the Battle of Bunker Hill (above) . In 1780, Trumbull traveled to England to study with Benjamin West. During his stay in England, after the capture and hanging of the spy Major John Andre, Benedict Arnold’s accomplice, the British held Trumbull captive because he held a rank similar to that of Andre. After his release, Trumbull returned to America and began documenting in paintings the people and events of the Revolution. 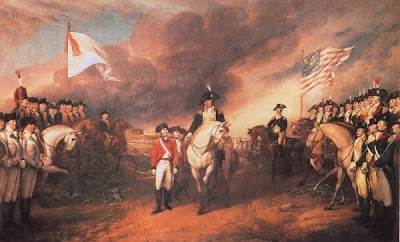 In The Surrender of Cornwallis at Yorktown, we can see Trumbull’s imaginative, dramatic renderings of famous historic scenes of American history. Unfortunately, despite making every effort to draw the persons and scenes from life whenever possible, Trumbull’s depictions are full of many errors and, perhaps even worse, guilty of propagandizing in the name of the new republic. (You can find an extended discussion of the issues of imperialism and encroaching republicanism in Trumbull’s rotunda paintings, including connections to the work of Jacques-Louis David during the French Revolution, here.)

I’ve always loved Trumbull’s work for its Romantic depictions of history that always drew comparisons to the work of David in my mind. Such flair always made the dry dates and names of history in the pre-video era more palatable for me as a kid. Unfortunately, as I learned as an adult, beneath that flair lies an agenda and a mythos that can either be the embodiment of what Thomas Jefferson called “the last, best hope of man on earth” or the beginning of another chapter in the long human history of conquest and victimization. As Jefferson also said, musing on America’s “original sin” of slavery, “If God is just, I tremble for my country.”
Posted by Bob at 5:36 AM