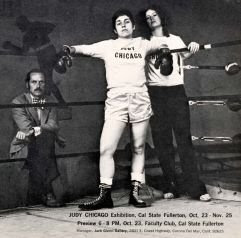 Gail Levin sets out her goal in Becoming Judy Chicago: A Biography of the Artist before setting down her first words about Judy Chicago. By dedicating this biography “In memory of Josephine Nivison Hopper,” painter and wife of Edward Hopper, the subject of Levin’s fine earlier biography, “and all the other erased women artists,” Levin strikes at the heart of the story of Judy Chicago’s art and the general struggle for recognition of women in art—the issue of erasure and writing of art history.

Levin chooses the moment of the artist taking on that name “Judy Chicago” as her point of departure (and even uses the “boxing” photo of that exhibit as her cover; image above). “Judy Gerowitz hereby divests herself of all names imposed upon her through male dominance and freely chooses her own name JUDY CHICAGO,” the artist declared at the time, declaring her own independence from her birth name of Cohen and married name of Gerowitz to the name of her own choice, complete with toughened, pugilistic attitude to take on “the big boys” of art in the fight for her place in the pantheon.

Levin’s spends much time tracing the roots of Judy Cohen’s formative years in Chicago as a child art prodigy in a secular Jewish family with Communist beliefs. Chicago’s father suffered under the oppression of the 1950s “Red Scare” and lost his government job, which helped contribute to his early death at 43. Years later, when she developed ulcers from her hectic work pace, Chicago realized she was “eating my own stomach away in an effort to become my father and, in that way, keep him alive.”

Judy Chicago kept her father’s beliefs alive throughout her life, not only in her feminist stuggles, but also in other fights for rights. She joined the NAACP in the 1950s and was politically active enough to earn the distinction of an FBI file as early as 1958. Her early trips to New York and exposure to the crushing poverty of the Lower East Side impressed on Chicago the need to give voice to the voiceless. Chicago’s 1990s Holocaust Project linked the evils of the Holocaust to other social wrongs: the parallels between Nazi slave camps and the history of slavery in America, the assembly line processing of the concentration camps and modern food plant animal processing, and the denial of the Jews’ plight and the modern denial of the dangers of nuclear weapons. Levin’s presentation of this universal aspect of Chicago’s activism, in contrast to the prevailing view of Chicago as “just” a feminist agitator, may be the most valuable part of this biography. 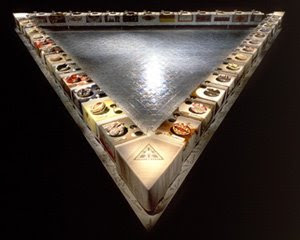 The centerpiece of Levin’s biography and Chicago’s art is, of course, The Dinner Party (image above) . Levin traces the development of The Dinner Party from its earliest conceptions all the way through its full realization as an integrated work of painting, text, ceramics, and embroidery, elevating women’s “domestic” arts to a status with the other fine arts. The critical firestorm generated in the wake of The Dinner Party, from the newspapers columns to even the halls of Congress, ends happily with the work finding a permanent home at The Elizabeth A. Sackler Center for Feminist Art at The Brooklyn Museum. Just as happily, for the larger purpose of inscribing a feminist history onto art history as a whole, was the inclusion of The Dinner Party into the 7th edition of Janson’s History of Art, the first edition to include women on its editorial team.

“The assertion of womanhood is a challenge to all those values that allow war, dehumanization, rape, and art that lacks relationship with reality to continue,” Chicago says. Judy Chicago’s call is a call to reality—a reality that embraces all aspects of humanity, including the female perspective. As a teacher, Chicago sees her task as the “undoing of role conditioning, which comes unraveled in the same pattern it was knitted by social pressure.” Gail Levin’s biography teaches by exerting this same “social pressure” and unraveling untruths about Judy Chicago and feminist art to help knit a new social fabric interweaving all strands of life.
Posted by Bob at 6:05 AM