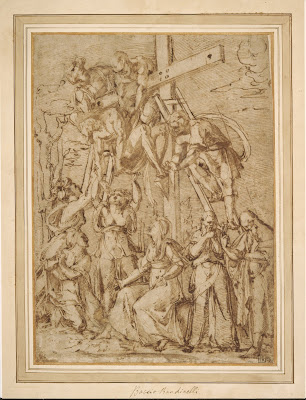 The German artist Adolph Menzel lived the motto “Nulla dies sine linea,” or “No day without a line.” The artists featured in the National Gallery of Art’s exhibit Private Treasures: Four Centuries of European Master Drawings prove that those are excellent words to live by.

The National Gallery of Art in Washington, DC, and The Morgan Library and Museum join together to present this incredible collection of European master drawings collected by a single, anonymous collector in just the last eleven years. As the Director’s forward to the catalogue says, “the quality of her collection bespeaks her profound knowledge and connoisseurship.” Margaret Morgan Grasselli and Andrew Robison of the National Gallery of Art and Rhoda Eitel-Porter and Jennifer Tonkovich of The Morgan Library and Museum not only have assembled a magnificent exhibit but have also written a beautiful and informative catalogue to compliment it.
One of the strengths of the collection is its early Italian drawings from the age of Michelangelo and Da Vinci. Neither of those greats appears here, but this exhibit demonstrates the massive depth and breadth of talent of draftsmanship during the Renaissance like few others. Familiar names such as Fra Bartolommeo, Correggio, Bronzino, Parmigianino, and Sodoma appear, but it is in the resurrection of these names as living, breathing artists that this exhibit excels. Baccio Bandinelli, once the rival of Michelangelo as a sculptor, lives again in the presentation of his boldly drawn, almost Michelangelo-esque Descent From the Cross (above) from 1528/1529. Even Giorgio Vasari, now known mainly for his Lives of the Painters, Sculptors, and Architects, the first compilation of artist biographies and study of art history and styles, shows off his drafting skills. (As an added treat, one of Vasari’s drawings has notes for his Lives written on the back.) 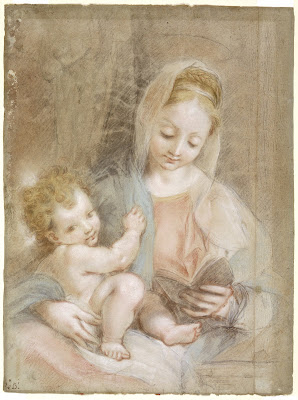 The Madonna Reading, with the Christ Child on her Lap (above), from 1568/1580, demonstrates the pioneering work in pastels by Federico Barocci. Pastels suffered under the misconception of being a lesser medium until the 19th century, but Barocci’s work proves that artists hundreds of years before Degas made that medium their own. Such re-evaluations of media and techniques lay at the heart of this exhibit and any exhibit on drawing, in my mind. Although many drawings are prepatory works for paintings, they should no longer be considered lesser works and should be appreciated for the techniques and talent behind them. 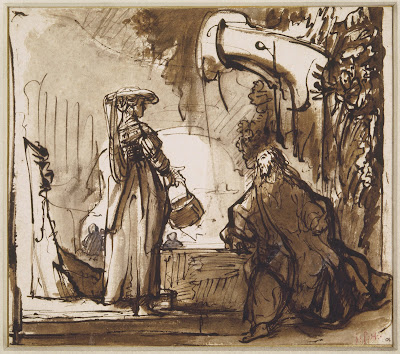 Ferdinand Bol (1616-1680), Christ and the Woman of Samaria, mid-1640s; pen and brown ink with brown and gray-brown wash with corrections in white (Private Collection)

The idea of drawings as primary works unto themselves, rather than servants of a final work, seems to originate with Rembrandt. In Ferdinand Bol’s Christ and the Woman of Samaria (above), from the 1640s, Bol uses the same vibrant lines and bold strokes of his teacher Rembrandt to revisit a familiar biblical scene and infuse it with new life. Rembrandt, who is not represented in the collection, looms over much of the drawing of the 17th century and later, freeing the medium of drawing from second-class status and freeing the hand of the artist from the purely classical lines of the Renaissance to express the emotional strokes of early Romanticism and Modernism. 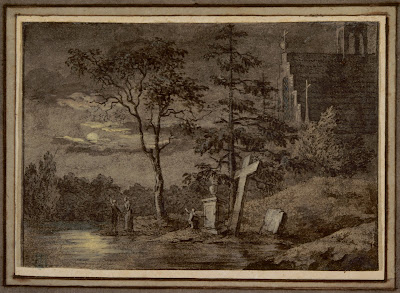 Caspar David Friedrich (1774-1840), Moonlit Landscape with Lovers and a Church, 1797/1798; pen and dark brown ink with brown, gray, and blue washes, heightened with white and touched with yellow and pink chalks, over graphite, with border lines by the artist (?) in pen and black ink (Private Collection)

Caspar David Friedrich’s 1797/1798 A Moonlit Landscape With Lovers and a Church (above) heralds this new wave of Romanticism. Andrew Robison’s short essay accompanying this work deftly analyzes the potential symbolism of Friedrich’s tiny work and also places it within the context of his later, grander Romantic landscapes. The works collected from the 19th and 20th centuries represent a turn away from the earlier religious works towards more individualized, humanist subjects. For example, Ingres’ double portrait of himself and his wife offers a glimpse in graphite into the artist’s soul that few other works by him allow. 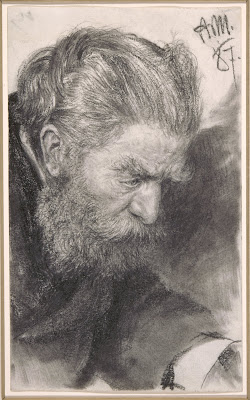 Friedrich’s drawing is only part of the second area of strength of the collection—later German drawings. Adolf Menzel’s Elderly Man Leaning Forward (above) from 1887 is done entirely in graphite, showing how Menzel was able to master that deceptively simple format and construct an almost sculpturally solid portrait full of fascinating textures. 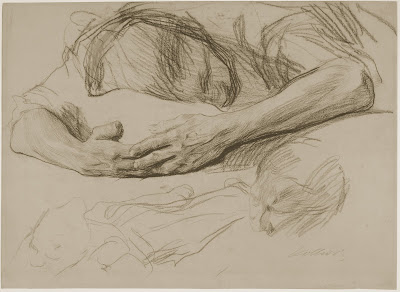 Käthe Kollwitz’s Grieving Mother (above), related perhaps to her Mother and Dead Son series of 1903, continues the collection’s exploration of German draftsmanship. The exactingly drawn hands of the grieving mother, who may be resting her head on a pillow or her child’s dead body, express the anguish we cannot see in her hidden face. Kollwitz’s portrait of herself at 60 years of age, also in the collection, reveals the weariness and the pride of the artist with an honesty seldom seen outside of the portraits of Rembrandt.

I’m leaving out many of the well-known names also in this exhibit (Degas, Constable, Gainsborough, Delacroix, Fragonard, and Redon, to name a few) because the true stars of this collection are the medium of drawing and the vision of this single, anonymous collector. Such exhibits of the lost masters of the past as well as the forgotten aspects of better-known genius should go a long way in establishing the field of drawing and works on paper as second to none.

[Many thanks to the National Gallery of Art, Washington, DC, for providing me with a review copy of the catalogue to Private Treasures: Four Centuries of European Master Drawings and the images from the exhibit.]
Posted by Bob at 5:52 AM