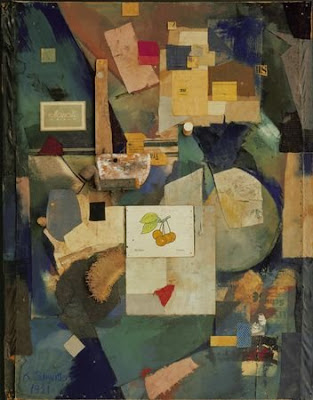 Kurt Schwitters, Dadaist, Surrealist, and pioneering installation artist, was born on June 20, 1887. One of his collages, The Cherry Picture from 1921, featuring a mix of colored and printed paper, cloth, wood, metal, cork, oil, pencil, and ink, with a bunch of cherries in the middle, appears above.

Schwitters never really fit into the categories of Dada or Surrealism during his lifetime, and was actually refused “admission” into Dada circles for being too bourgeois. Perhaps his boldest works were his installations, such as The Merzbau, a series of rooms full of found items arranged by Schwitters in Hannover, Germany. Unfortunately, the original Merzbau was destroyed in World War II, but Schwitters attempted new installations after fleeing Germany as the war approached. (Stills from the original Merzbau appear above.) 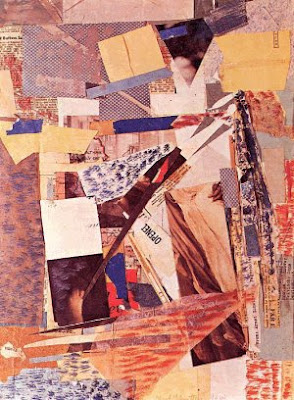 Falling under the Nazi label of “Degenerate Art,” Schwitters took his innovations to England and even built a Merz installation in the Lake District of the English Romantic poets. His As You Like It of 1946 (above) shows how he continued to develop his collage technique in England, where he died in 1948. Many Schwitters-esque collages are passed off as works by the master, leading to efforts to document all of his works to ensure the safety of buyers.

Schwitters collages and installations lack most of the confrontational aspect of most other Dadaist or Surrealist art. He’s the “comfortable” Dada artist that we can invite into our living room and not worry about what will happen to the furniture. In death, Schwitters has been accepted into the Dada/Surrealist circles, where his reputation will only grow as recognition of his pioneering installation art increases.
Posted by Bob at 6:03 AM