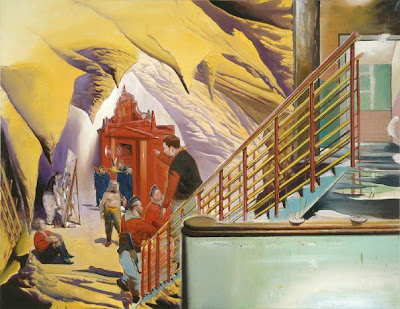 In the June 4, 2007 issue of The New Yorker, Peter Schjeldahl profiles German artist Neo Rauch, who may be the best painter alive that the public at large has never heard of. Rauch’s coming-out party—a solo exhibit at the Metropolitan Museum of Art in New York of 14 new paintings—should help out with that.

Rauch purposely creates a cryptic landscape in his paintings, such as in Krypta (above). His brand of surrealism frustrates even more than Dali’s because of the almost complete use of familiar things in absurd settings, albeit in high-keyed colors. Dali’s surrealism almost seems familiar as the unreality of a dream. As Schjeldahl points out, Rauch’s paintings defy explanation while inviting it, frustrating our consciousness rather than exploring our unconsciousness. Schjeldahl sees Rauch’s work as conveying “a vision of futility as destiny”:

“The more observant you are of erudite allusions in the show (some male figures display particular airs and dress styles of nineteenth-century German Romanticism), the more acute will be your frustration in trying to make sense of it all. If Rauch’s work is nightmarish, as some critics have asserted, the effect pertains not to its dramas but to their mockery of understanding. They are not mysterious, because mysteries imply solutions. Rather, they convey that we may know plenty but our knowledge is useless. There is a highly contemporary sting in this. Today, we are flooded with accurate information—letting us confidently judge the failures and iniquities of political leaders, for instance—and we naturally feel that such clarity must influence events, but it only amplifies our dismay as the world careers from one readily foreseeable disaster to another. Rauch sets us an example of getting used to it.” 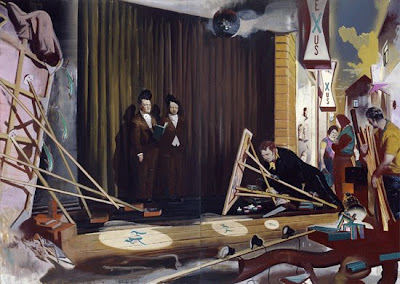 Rauch holds the mirror of our own limitations up to our face in his paintings. In Nexus (above), we recognize people on a stage and can even almost read the full word “Nexus” on the sign at right, but we can never wrap our imagination around the painting completely. His paintings serve as microcosms of the larger ineffability of our reality, no matter how deeply we delude ourselves that we understand and are in control. In the end, Schjeldahl laments over Rauch’s apt incommunicability that “[p]resent-day reality is a lot more like one of his pictures than I wish it were.”
Posted by Bob at 6:12 AM