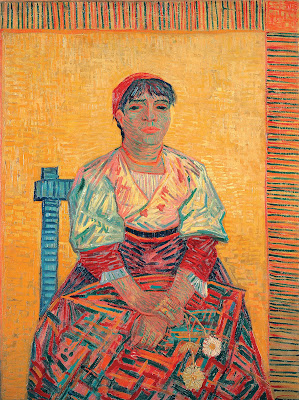 “Van Gogh was father to us all!” Max Pechstein once enthused, speaking for himself and his fellow German Expressionists. Few pieces of accepted wisdom about modern art have reached the level of acceptance as the influence of Vincent Van Gogh on the Expressionists. The Neue Galerie’s exhibit and companion catalogue, Van Gogh and Expressionism, analyze this commonplace assumption and dig down to the roots of the Dutchman’s hold over the imagination of so many early German and Austrian artists and, consequently, their shared hold over own imaginations today.

Van Gogh’s influence on German art in the early twentieth century was twofold—through his paintings and through his legend. As Jill Lloyd, guest curator of the exhibit at the Neue Galerie, explains in the opening essay of the catalogue, dozens of shows were held in Germany shortly before World War I, including ten at the Berlin gallery of Paul Cassirer alone between 1910 and 1914. The widow of Van Gogh’s brother Theo, Jo Van Gogh-Bonger, helped make Van Gogh’s work available to this new, growing audience. (As Stephan Koldehoff remarks later in his essay on “Van Gogh in Public and Private Collections: His Introduction to Germany,” it is Jo’s “clever sales and exhibition policies” that “ensured that enough paintings were available for sale without creating an oversupply,” setting a standard for Van Gogh sales prices continuing to today.) To help promote these shows, art critic and gallery owner Julius Meier-Graefe published a series of monographs and books on Van Gogh emphasizing the more sensational aspects of his life and death. The German translation of Van Gogh’s letters in 1906 cemented Van Gogh’s reputation as a tortured genius in the minds of collectors and artists. “This is a brain suffering under the burning of a star,” Paul Klee wrote after reading Van Gogh’s letters. Collectors and artists both “hitched their wagons” to Van Gogh’s “star,” which glowed white hot with influence. 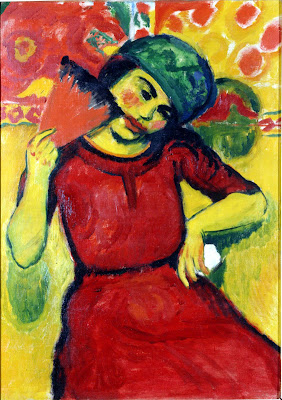 Initially, Van Gogh’s use of color and expressive brushstrokes influenced his German “children.” Young Woman with a Red Fan (above) clearly shows the influence works such as Van Gogh's The Italian Woman With Carnations (top of post) had on Max Pechstein’s use of vibrant color, including the use of complementary and contrasting colors to create even more vibrant visual palettes. “Van Gogh’s conviction that color was not descriptive but rather expressive and symbolic was vitally important” to artists such as Emil Nolde, Lloyd stresses. Almost all of the members of Der Blaue Reiter and Die Brucke groups go through some type of “Van Gogh phase,” often merging with the accompanying influences of related artists such as Edvard Munch and Paul Gauguin. Alexj von Jawlensky, whose use of Van Gogh-esque color “introduces a coyness and self-awareness quite different from the disturbingly direct intensity of Van Gogh,” in Lloyd’s view, goes so far as to purchase one of his hero’s paintings. Wassily Kandinsky’s initial coolness to Van Gogh’s intensity gives way to an appreciation Van Gogh’s use of color as an expressive force, which Kandinsky uses as “a vital stepping stone in the development toward abstraction.” Franz Marc adopts a personalized version of Van Gogh’s color symbolism through a combination of seeing Van Gogh’s paintings and reading his letters. The life-force yellow of Van Gogh’s famous Sunflowers becomes the joyous yellow of Marc’s Yellow Cow. Marc’s symbolism follows the spirit if not the letter of Van Gogh’s system. 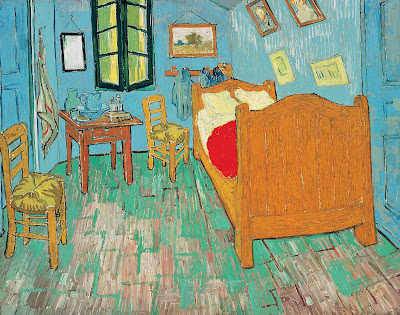 Later artists such as Egon Schiele emulated Van Gogh’s use of expressive line and contour over his groundbreaking color and brushwork. Schiele saw many parallels between his own life and Van Gogh’s, especially when Schiele was persecuted by the law for his controversial nudes. This personal link between Van Gogh and Schiele finds its greatest expression in Schiele’s remaking of Van Gogh’s The Bedroom (above) as his own The Artist’s Bedroom in Neulengbach (below). Schiele takes Van Gogh’s environment and refashions it as his own, changing the perspective of the viewer and, although continuing to emphasize expressive line, uses his own distinct drafting style, personalizing the memory of Van Gogh for his own purposes. Later, during the dark days of World War I, Schiele painted his own versions of Van Gogh’s Sunflowers, but now withered and dying to symbolize the dwindling European life force, sucked dry by conflict. 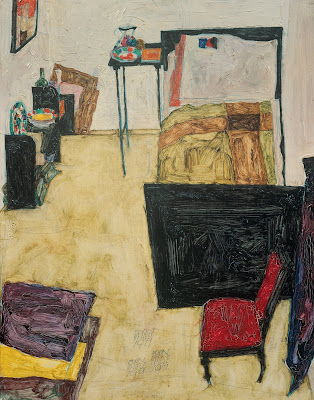 Additional essays in the catalogue pick out specific threads of Van Gogh’s influence. Chris Stolwijk analyzes Van Gogh’s own ideas about painting’s expressive power and asks “how far the advocates of Expressionism actually used Van Gogh’s life and work to suit their own purposes.” He centers this reading (or misreading) around Van Gogh’s view of art as “an opportunity to import universal values to the viewer, through themes and motifs taken from real life” versus the Expressionist’s priority of art “as the most effective expression of an artist’s individual emotions.” Olaf Peters tackles the thorny issue of German nationalism and National Socialism in regards to Van Gogh. Thanks in part to Martin Heidegger’s interpretation of Van Gogh’s art as conveying the same homely “truths” as National Socialism did, German nationalists initially embrace Van Gogh as a “Germanic” (via the Dutch-Deutsch connection) artist. With the rise of Nazism, however, Van Gogh soon seems “too French” and a social outsider antagonistic to the collective ideal of the volk, culminating in the label of “degenerate art.” Patrick Bridgewater examines Van Gogh’s extra-artistic influence on literary expressionism. Poets such as Rainer Maria Rilke, Georg Heym, and Gottfried Benn find inspiration in Van Gogh’s art and letters, embracing the Dutchman as a “patron saint” for those looking for liberation from the chains of the past. Paradoxically, Van Gogh helps readers “to find themselves through self-forgetfulness” through the inspirational power of his paintings and words. 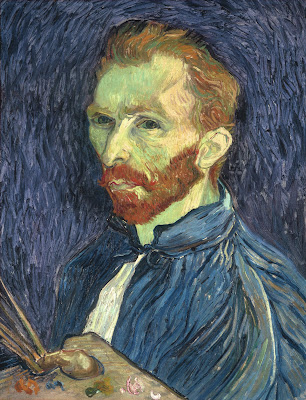 In perhaps the most intriguing essay, Michael Peppiatt addresses “The Legacy of Genius: Van Gogh and Francis Bacon.” Francis Bacon formed a complete identification with Van Gogh, keeping Vincent’s letters nearby as bedside reading throughout his artistic life. After seeing the 1956 film version of Van Gogh’s life, Lust for Life, Bacon paints a series of paintings based on Van Gogh’s The Painter on the Road to Tarascon. “For both artists nothing counted more, or was more difficult to achieve through art, than the recreation of life intensely lived,” Peppiatt asserts. Bacon often quoted Van Gogh’s remark that he wanted painted lies, “but lies that are more truthful than literal truth.” These “more truthful” lies appear most powerfully in Van Gogh’s self portraits, such as the one above from 1889. These portraits, along with the growing cult of Van Gogh’s personality (or the fictionalized personality marketed by art dealers), resulted in self portraits such as that by Karl Schmidt-Rottluff (below). Schmidt-Rottluff uses both the expressive color and brushstrokes of Van Gogh while simultaneously identifying with the image of Van Gogh as tormented genius. Such emulating self portraits by Schmidt-Rottluff and others serve not only to acknowledge Van Gogh but also to create creative space from him. As Peppiatt says of Bacon’s relationship with Van Gogh, “Van Gogh was doomed, by his own brilliance, his own contradictions, his own overwhelming fate to be an artist—all things that Bacon shared and which… he had tried to get some distance from by painting them.” 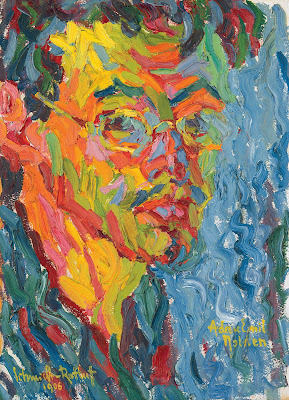 Van Gogh and Expressionism pulls back the layers of accepted wisdom regarding influence and artistic lineage and sheds new light on old truths, not by dismissing them but by bringing them into sharper focus. This exhibit would tie in nicely with the recent exhibit The Mirror and the Mask: Portraiture in the Age of Picasso, which also featured key portraits by Van Gogh. Between those two exhibits and catalogues one could gain an entire education on the portrait in the twentieth century as fathered by those two modernist giants, Picasso and Van Gogh.

[Many thanks to the Neue Galerie in New York City for providing me with a review copy of the catalogue to this exhibit as well as the images from the exhibit.]
Posted by Bob at 5:51 AM