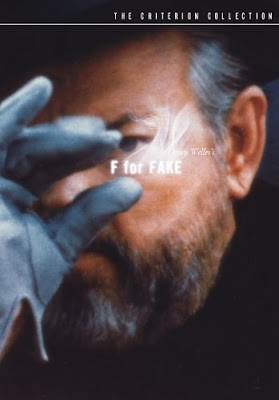 When the flush of a new-born sun fell first on Eden's green and gold,
Our father Adam sat under the Tree and scratched with a stick in the mould;
And the first rude sketch that the world had seen was joy to his mighty heart,
Till the Devil whispered behind the leaves, "It's pretty, but is it Art?"

Wherefore he called to his wife, and fled to fashion his work anew –
The first of his race who cared a fig for the first, most dread review;
And he left his lore to the use of his sons -- and that was a glorious gain
When the Devil chuckled "Is it Art?" in the ear of the branded Cain.

From Rudyard Kipling, The Conundrum of the Workshops

In his last completed movie, F for Fake, Orson Welles quotes from Kipling’s poem above with a twinkle in his eye. Ostensibly a documentary on the story of the great art forger Elmyr de Hory , who could forge a Picasso, Matisse, Modigliani, and many other modernist masters right before the cameras, Welles movie actually is a tone poem about the nature of art and artifice—how storytelling, whether it be in a book, painting, or movie, always involves a lie.

Peter Bogdanovich, in his introduction to the movie on the DVD, warns the viewer to not expect a linear storyline. Instead, Welles circles around the story, misdirecting you like any good conjurer while giving you enough substance to hold your attention until the final revelation. Serious issues of what truly constitutes art are embodied in the person of Elmyr, who becomes a sad anti-hero by movie’s end. When Elmyr’s works pass muster as true Picassos, etc., under the eye of the highest-ranked art critics, faith in the concept of expertise and “objective” judgments of quality are shattered. Although no names are named, Welles alludes the possibility that many paintings by Elmyr currently hang in prestigious collections around the world as “genuine” works by acknowledged masters. Does the fact that a painting is done by Elmyr rather than Modigliani make it any less beautiful? Welles leaves that question levitating in space for each of us to answer for ourselves.

When the biographer of Elmyr, Clifford Irving, himself becomes involved in a fake biography of Howard Hughes, Welles exalts in the intricate web of deception as the chronicler of a fraud becomes a fraud himself. Charlatanism spreads virally throughout the film, alluding back to Welles own fraud of the famous “War of the Worlds” radio broadcast in 1938. All the way to the end, we hear Kipling’s Devil chuckle “Is it Art?”, knowing that each of us bear “the mark of Cain” that comes with any act of imagination.

Near the end of the film, Welles stands before Chartes Cathedral and in a magnificent monologue wonders at how such an achievement could have no signature, no famous name attached to it, and yet remain an inspiration. Chartes stands as a pure work of art, free of the taint of individual personality and the prejudices that signatures entail.

F for Fake deserves a place on the shelf and in the mind of anyone who loves thinking about art, about what constitutes art, and about what an artist truly achieves.
Posted by Bob at 6:01 AM