Something to Believe in 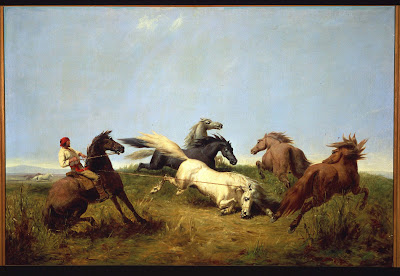 How is it possible that a painter renowned during his own time as one of the quintessential image-makers of the still-young American psyche can have been lost to the mists of time? In the exhibit Forging an American Identity: The Art of William Ranney currently at the PMA, we can rediscover an artist who helped Americans visualize what their country could be and discover an artist who can still tell us much about ourselves today.

Not much is known about the life of William Ranney. Linda Bantel sleuthed out over the last ten years much of what we know about Ranney and has collected her findings in the wonderful catalogue to the exhibit, a marvelous piece of scholarship. The simple facts of his life presented in Ms. Bantel’s essay are these: Ranney was born in Middletown, Connecticut, in 1813; moved to Fayetteville, North Carolina, as a teen after the death of his father; studied art somewhere in New York City in the 1830s; and finally settled down with his family in West Hoboken, New Jersey, around 1850, where he died of tuberculosis in 1857 at the age of 44. He left no diaries or letters. Other than from his paintings, all we know of his interior life comes from family stories passed down the generations. But this simple man was defined by one bold move in his life—volunteering to help fight in the Texas War for Independence in 1836. This defining moment of his life left an imprint on his artwork as much as it did the still-forming concept of the American West.

Although Ranney spent a scant nine months in Texas, it was enough to give birth to the central impetus of his art, albeit ten years later. After working as a portrait painter, the typical genre for working painters at the time, Ranney truly emerged as an artist after the Mexican-American War drove him to revive those memories of his time in the West and put them onto canvas in service of the same ideals that spurred him to volunteer for the cause. As Peter H. Hassrick points out in the catalogue to the exhibit, if Ranney “harbored sympathies for Polk’s expansionist cause” of the Mexican-American War, “he was among the large segment of the American populace who thought that winning Texas was not just the United States’ rightful claim of a deserved bounty in the Southwest, but an expression and preservation of democracy itself.” In paintings such as Hunting Wild Horses (above), Hassrick sees Ranney portraying not only the Westerner taming the wild frontier but also “the common man (the Texan)… battling against old world despotism (Mexico).” Ranney is a true believer in the sanctity of Manifest Destiny as part of the new faith of the American Ideal. 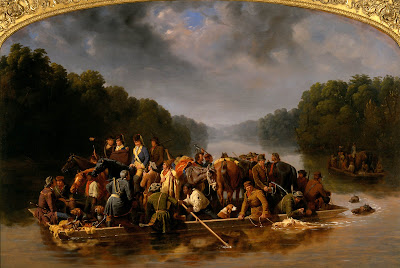 In works such as Marion Crossing the Pedee (above), Ranney intentionally connects the spirit of the American Revolution with the 1840s fervor for expansion in the Mexican-American War. Francis Marion, “The Swamp Fox,” led rag-tag American troops against the British in guerrilla-style warfare all through the South. Ranney undoubtedly heard legends of Marion during his time in North Carolina and selects Marion as an example of rugged American individualism squaring off against tyranny. Painted at the same time as Emanuel Leutze’s epic Washington Crossing the Delaware, in which George Washington stands and trumpets his presence, Ranney’s Marion Crossing the Pedee strikes a democratic, leveling note as Marion stands amongst his huddled troops, a muted presence, first among equals, but still blending in with the crowd. (For you Where’s Waldo? fans, Marion is the middle horseman of the three on the left.) Ranney actually tried his hand at idol-making in his Washington Rallying the Americans at the Battle of Princeton, restaging David’s Napoleon Crossing the Alps for the Father of his Country, but such grand history painting struck the wrong chord in what Ranney saw as the grand concert of strong individuals making the new country side by side. 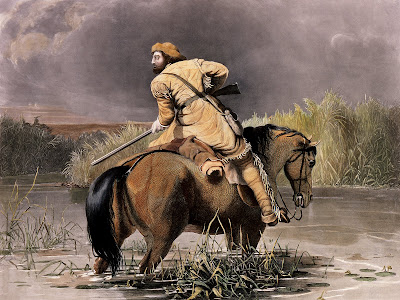 Much of Ranney contemporary success came thanks to the American Art-Union, which promoted the work of Americans painting American scenes, including the distribution of prints of selected works to their membership, once 20,000 strong. Ranney’s Marion Crossing the Pedee spread across the country in print form. Another work distributed widely in print form was his The Trapper's Last Shot (above; original painting here). Ranney shows here the trapped Trapper, surrounded by unseen Indians waiting for him to fire his last bullet before moving in for the kill. In such works, Ranney shows his clear-eyed view of the West and all its very real dangers, including the displaced Native Americans. Despite these dangers, however, Ranney never fails to see the West as a place of promise. The beatific expression of Daniel Boone in Ranney’s Boone’s First View of Kentucky presents a “composed epiphany for an aspiring people,” Hassrick believes, to act as “a salve for wounds of disquiet as a celebration of future hopes for the country.” Between of the birth pangs of Western expansion and the rending of the national fabric from slavery and the impending Civil War, Ranney offers the healing power of nature in an Edenic image of paradise regained in the “undiscovered country” of the American west. 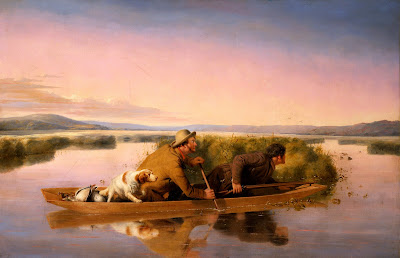 In addition to the scenes of history and Western adventure, Ranney painted quieter genre scenes of hunting and fishing, often painting the marshlands of West Hoboken in his own backyard. In Duck Shooters (above), Ranney shows off his bravura technique in the depiction of the hunters, their gear, and even their dogs. (Kathleen Foster, the curator of the PMA’s American collection, marveled at the mastery of Ranney’s dogs during the press preview for the exhibit.) All of the elements are exactly correct for the type of hunting involved, in tune with Ranney’s own following of the code of the sportsman. Just as with the code of the West, Ranney fervently believes in the code of the hunter and fisherman, revering nature in the proper ways of interacting with it through sport. 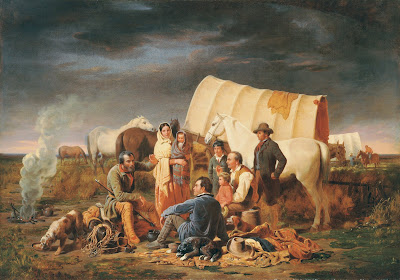 Ranney’s faith in the American dream remained strong even as his body weakened, tormented by tuberculosis. The Victim, a sinuous, almost Delacroix-esque depiction of a bull attacked by ravenous wolves, may symbolize Ranney's agony. In the late painting, Advice on the Prairie (above), Ranney transitions his view of the West from the old phase of the individual trapper to the new phase of the family unit colonizing the new world. As Hassrick points out, “The family in Ranney’s painting provides a pictorial embodiment of the supposed sanctity of expansion.” Not only does Ranney impart his own advice in this painting, but he also gives his final blessing. 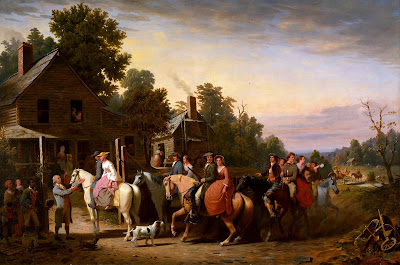 In works such as Virginia Wedding (above), we see the gentleness and humor of Ranney’s vision. Ranney served as a mirror for his time, showing Americans of the first half of the nineteenth century the face they wanted to see in the mirror and, perhaps, needed to see in the mirror. During the press preview for the exhibit, Kathleen Foster pitched the exhibit as a family affair, where children could come and see dusty history books come alive while adults could look at the ideas and issues involved in the paintings and engage in “subtler thoughts.” It is in the realm of these “subtler thoughts” that Ranney rankles me.

When I first saw the title of the exhibit and catalogue, “Forging an American Identity,” I wondered whether the choice of the word “forging” was made consciously acknowledging the word’s two meanings: making and faking. Ms. Foster stressed that the museum’s approach to Ranney’s brand of American “mythology” was not as a fiction but rather as the expression of shared values that brought people together, providing a valuable service for the ever-fragile union. By all indications, Ranney was sincere in his belief in America, and I’m sure that Ms. Foster is sincere in her belief in Ranney’s belief. Furthermore, museums should not be in the business of making value judgments about the ideas in art. (You can argue that accepting Ranney’s ideas at face value is itself a value judgment, but I won’t.) However, setting questions of intentionality aside, I can’t help but see the greatest value of this exhibit resting in this issue of “forging” and “identity,” stressing the “faking” over the “making.”

When I asked Linda Bantel about the funding behind the American Art-Union and its promotion of American art and, consequently, American ideals, she confirmed that it was privately and not publicly (i.e., governmentally) funded. When I followed up with a question about her opinion of whether the Art-Union actively promoted a specific agenda, she answered that the Art-Union “reinforced” prevailing attitudes about America and the Mexican-American War rather than helped shape them. Personally, I see it as more of the “chicken and egg” dilemma at the heart of all political art. Did David “create” the French Revolution or did the Revolution “create” him? The truth most likely lies somewhere in the middle. The cautionary tale Ranney’s paintings tell is the story of America’s ever-increasing cycle of imperialism by public consent. Seen in this way, American history becomes a lineage of tragedies capitalized upon—The Boston Massacre begets the Alamo begets Fort Sumter begets Custer’s Last Stand begets the Maine begets Pearl Harbor begets September 11th—each with the requisite trio of “V”s: hallowed victims, unalloyed villains, and justified and sanctified vengeance.

I want to stress that the PMA’s presentation of the paintings does not at all indulge in jingoism. In fact, they supplement the Ranney exhibit with a “Who’s Missing From This Picture?” collection of works featuring Native Americans by contemporary artists such as George Caitlin. Ranney most likely never saw Native Americans and, therefore, never portrayed them. They do “appear,” however, as ominous off-screen villains, waiting for the trapper to take his last shot, for example. Again, intentionality aside, which we must do with the cipher that is Ranney, the effect of these missing figures is to marginalize the darker reality of American Western expansion. As Ms. Foster pointed out, the exhibit’s appeal for adults rests in subtle consideration of these issues. What I fear is that the average American has become incapable of such considerations. The media phenomenon Noam Chomsky calls “manufacturing consent” conditions so much of our reactions today that we barely realize it. In the paintings of William Ranney, we see the early days of how the idea of America was “forged” or “manufactured.” From those origins, we can trace the forging of twenty-first century America and our own complicity in that creation. The power of Ranney, like that of all genius, is to speak as loudly to his time as our own, albeit with a vastly different message.

[Many thanks to the PMA for providing me with a review copy of the catalogue to this exhibition and the images above from the exhibition. The Buffalo Bill Historical Center in Cody, Wyoming, where this exhibit originated, has archived a wide selection of Ranney’s work.]
Posted by Bob at 6:02 AM