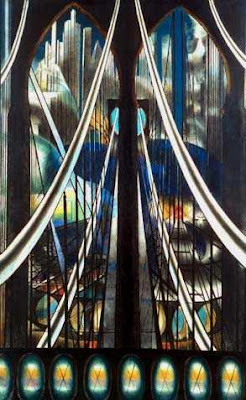 Joseph Stella, born in Italy on this date in 1877, brought Italian Futurism to America and made it swing to the tunes of the Jazz age and the rhythms of New York City, his adopted home.

Stella’s most famous work is his 5-panel Voice of the City of New York Interpreted. The panel titled The Bridge (Brooklyn Bridge) appears above. Stella’s reinterpretation and expansion of the religious triptych simply expands on the basic tenets of Futurism, as stated by F.T. Marinetti in the The Futurist Manifesto:

We will sing of the great crowds agitated by work, pleasure and revolt; the multi-colored and polyphonic surf of revolutions in modern capitals: the nocturnal vibration of the arsenals and the workshops beneath their violent electric moons: the gluttonous railway stations devouring smoking serpents; factories suspended from the clouds by the thread of their smoke; bridges with the leap of gymnasts flung across the diabolic cutlery of sunny rivers: adventurous steamers sniffing the horizon; great-breasted locomotives, puffing on the rails like enormous steel horses with long tubes for bridle, and the gliding flight of aeroplanes whose propeller sounds like the flapping of a flag and the applause of enthusiastic crowds. 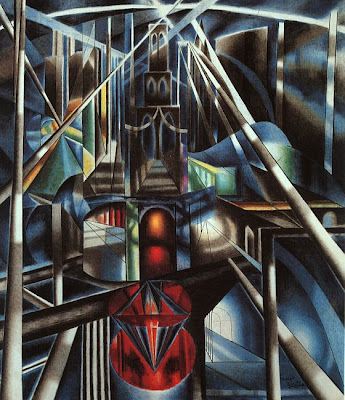 Stella fell in love with New York City, which became a church of all the modern machinery and speed the Futurists dreamed of as the hope of humanity’s future. Many of those dreams were tragically dashed in the mechanized mayhem of World War I, which literally consumed the lives of many of the Italian and Russian Futurist artists. In Europe, Futurism literally died out. However, Stella lived on in America, which was relatively untouched by “The Great War,” and could still believe in modern industry enough to paint paeans to progress such as Old Brooklyn Bridge (above).

I’ve always loved the Futurist style for its bold sense of movement. The imagination behind Battle of Lights, Coney Island (above) has made it impossible for me to see amusement park lights in the same way again. The excesses of the Futurist philosophy that led to the glorification of war and, ironically, its own extinction have pushed that movement to the back of the memory of the 20th century, but the art that arose from that movement will forever testify to their unanswered prayers for salvation through the machine.
Posted by Bob at 6:13 AM

I´m a fun of futurism art. My work have a lot of this. My work is some dark and funny (it´s rare mixing) if you have time, please visit my gallery on...