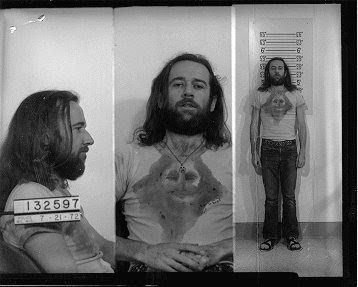 Watching the ultrabland, overgroomed, tightly buttoned hairpieces that pass for television news personalities eulogize George Carlin, who passed away last night, as if he were a seminal influence on their lives was an absurd moment worthy of a George Carlin comic diatribe. Even posthumously, Carlin's material continues to flow around us. I can honestly say the Carlin was and remains an influence on me, kind of that strange, funny uncle who would pull you aside and tell you what the real score was. Carlin's "Seven Words You Can Never Say on Television" (which all the television tributes STILL aren't allowed to say, as they kept pointing out) made me see language in a whole new way, teaching lessons about power and authority that made me laugh and think at the same time. (Carlin's mug shot from his arrest over the "Seven Words" controversy appears above.) Every teenager should have the joy of listening to a Carlin album when their parents think they're doing something else and discovering the strange uncle they never knew they had. Carlin's curiosity shall live on as long as someone can point a finger at absurdity in its most cruel and bullying forms and laugh, rather than cry. 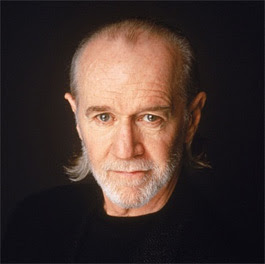 I'm sad he's gone. He was also the American narrator for "Thomas the Tank Engine" which somehow seemed fitting.