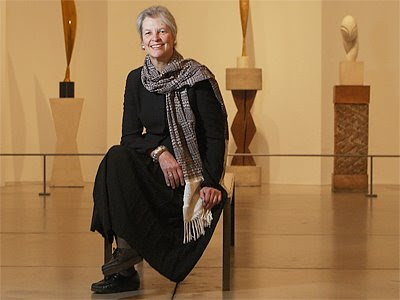 It was with some shock and great sadness that I learned today that Anne D’Harnoncourt, the Philadelphia Museum of Art’s Director since 1982 and CEO since 1996, died this morning at the age of 64. Anne (shown above in the gallery of her beloved Brancusi sculptures) joined the PMA in 1972 and helped make it one of the great arts institutions in America. She will be sorely missed. My heart goes out to her family—especially her husband Joseph Rishel, a curator at the PMA—and to the entire PMA family.

I had the privilege of hearing Anne speak many times and once even got to shake her hand at a press preview. I never had the honor of an interview, but I never pursued one. At press previews, Anne kept in motion continually, working the local television and newspaper representatives before dashing off to another of her responsibilities. Anyone within a hundred yards of her smile and voice experienced her energy and passion for the PMA.

Most people would rank the opening of The Perelman Building as their favorite Anne memory, justifiably so considering how that should stand as one of her great achievements. However, my favorite Anne memory is a smaller, quieter moment just after the press preview tour for the recent Frida Kahlo exhibition. As Anne led a gaggle of press corps down a hallway towards the luncheon reception, she paused long enough to show us a satellite exhibition of other great Mexican artists. Anne paused and looked back for one of the curators to catch up and talk up the art. When none was to be found, Anne smiled and held forth on the great “lesser” names in Mexican art surrounding us, “poaching” on curator’s “territory” as best as she could. I already knew that, in addition to being a great administrator and business mind, Anne was also a great lover and scholar of art, but that moment really brought it home to me. I’d like to think that she’s up there somewhere now talking up the art of the past with the artists themselves, smiling and charming them all, too.
Posted by Bob at 5:48 PM