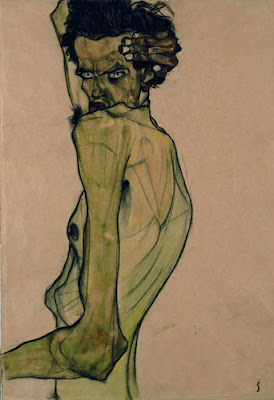 In the long history of art and art censorship, few artists faced such obstacles to expression as did Egon Schiele. Born June 12, 1890, Schiele struggled mightily against the conservatism of European art before World War I. I like to draw a parallel between Schiele and the poet John Keats, in that both artists created a large body of work in a small window of time. Percy Bysshe Shelley wrote the elegiac “Adonais” for Keats, claiming that harsh critics of Keats’ poetry hastened his death by tuberculosis. No elegies exist for Schiele, but his death in the great Spanish flu of 1918 may also have come sooner thanks to the critical and moralizing forces gathered against him. Schiele brought a whole new, Expressionist sensibility to the depiction of the human body, especially his own. In Self-Portrait With Arm Twisting Above Head (above, from 1910), Schiele contorts his own body in an act of self-torture, playing out in flesh the turmoil in his soul. Despite the pain, Schiele always found the courage and confidence to soldier on in his striking style.

As a teenager, Schiele discovered the works of Gustav Klimt, who also tangled with the morality police of Austrian art. Fortunately for Schiele, Klimt took an interest in his art and encouraged Schiele to continue, buying works by Schiele when nobody else would. In Self-Portrait in Street Clothes, Gesturing (above, from 1910), Schiele demonstrates the expressive power of hands by covering over the rest of his body except for his face. Klimt may have helped Schiele develop this skill. Like so many other German Expressionists, Schiele joined the burgeoning cults of Edvard Munch and Vincent van Gogh, adding their Expressionist approaches to his own repertoire. Self-Portrait in Street Clothes, Gesturing reminds me of the many Van Gogh portraits involving hats and other props to accentuate the individuality of the sitter. 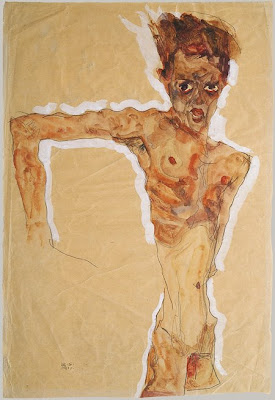 Schiele’s art and bohemian lifestyle continually drew curious eyes to him. In 1912, authorities arrested him on charges of seducing an underage girl. Schiele’s painting of young women, usually undressed, had caught up to him. A judge dismissed the seduction charge only to level new charges of pornography against Schiele. Schiele watched helplessly as the same judge burned one of his watercolors in court. In the year he died, Schiele participated in the 49th exhibition of the Vienna Secession. Chosen to design the exhibition poster, Schiele painted a version of the Last Supper, placing himself in the role of Christ just before the betrayal and death. Looking back at such works as the 1911 Self-Portrait above, I can’t help but connect in my visual mind Schiele’s skeletal figures and the photos of the victims of the Holocaust. Such horrors remained decades in the future, but Schiele intuitively knew the depths of human misery and how such agony could be marked upon the human figure. The frank sexuality of Schiele’s art still disturbs me in its intensity, but if Schiele’s art and life stand for anything, it’s that we’re not always meant to be comfortable. It is often when we’re shaken up that we learn the most. Unfortunately, the shakers and movers, such as Schiele, often pay a huge price that others can only imagine.