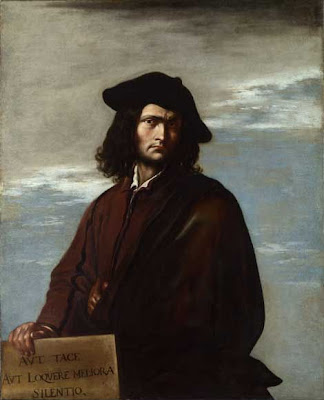 "Of Silence and Speech, Silence is better," says the inscription in Salvator Rosa’s 1640 Self-Portrait (above). Born June 20, 1615, Rosa let his paintings and etchings do the talking, and bragging. Only the ego of Salvator Rosa could title an etching The Genius of Salvator Rosa. In many ways, Rosa follows in the “wild man” footsteps of artists such as Caravaggio, living life to the fullest and making friends and enemies everywhere he went. In addition to his paintings, Rosa wrote biting satires that jabbed at many of his contemporaries. Perhaps when Rosa claimed to prefer silence, he meant the silence of others. The deep, dramatic darks of this self-portrait show that Rosa followed Caravaggio in more than just pugnaciousness. 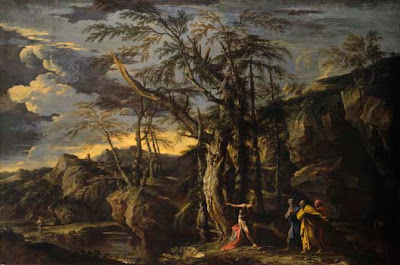 I’m not sure if Rosa ever met his slightly older contemporary Nicolas Poussin, but it would have been interesting to witness. Poussin, all erudition and class, sitting across from Rosa, brash and spontaneous—yet both supremely talented. Rosa’s Landscape with Saint John the Baptist Pointing Out Christ (above, from 1655-1660) shows the influence of Poussin, who set the standard for seventeenth century landscape. All the classic Poussin elements are there: an easily conveyed moment of drama, tiny figures dwarfed by nature, layers and layers of depth reaching back forever. Yet, Rosa adds a Romantic element that the cool classicist Poussin could never bring himself to try. The agitation reflected in the stormy sky and swaying trees could never exist in a Poussin’s perfectly ordered world, but paved the way for artists such as Caspar David Friedrich to take even further in the tempestuous nineteenth century. 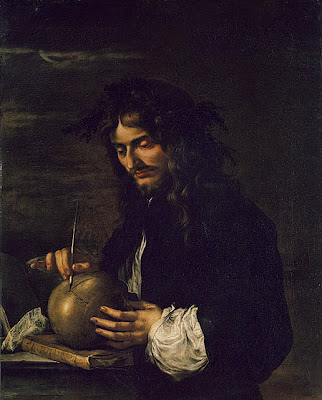 Rosa also explored the Gothic side of Romanticism in works such as the Self-Portrait with Skull (above), done later than the 1640 self-portrait. On the skull, Rosa writes in Greek, “Behold, whither, when”—a classic case of memento mori. The eighteenth-century British novelist Ann Radcliffe, who specialized in lurid Gothic page-turners such as The Mysteries of Udolpho and The Italian, loved the works of Rosa and strove to capture the spirit of his works in her writing. For all his colorful brashness, Rosa took the work of art seriously, encompassing the works of the past as well as contemporary movements while incorporating his individuality in a way that makes him strikingly modern even today. In today’s self-promoting art world, The Genius of Salvator Rosa wouldn’t make anyone look twice at the title.

Great post, Bob. You have introduced me do a very interesting character in Rosa.