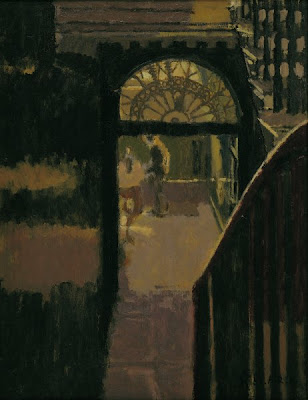 When James McNeill Whistler learned that Walter Sickert had paid for art school, he told him to stop going and not to waste his time after wasting his money. Instead, Sickert became Whistler’s assistant, learning Whistler’s thin, atmospheric style first hand. When Sickert traveled to France in the 1880s and met Edgar Degas, he soon fell under the stylistic spell of Degas, taking on the heavy-handed impasto technique of the French master. For Whistler, it was either his way or no way, so he and Sickert soon parted ways. Sickert’s Whistler's Studio (above, from 1918) shows the affection Sickert still held for Whistler, whose studio Sickert worked in after Whistler’s death. Born May 31, 1860, Sickert was a typical eccentric of the Victorian era, with all its studied affectations and repressed (and badly expressed) sexuality. Today, Sickert is known mainly for two things—his amazing, Degas-inspired nudes and the accusation that he may have been Jack the Ripper. 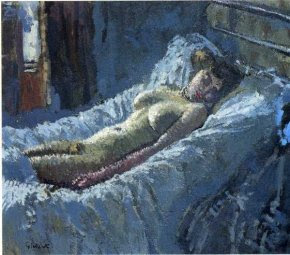 Sickert’s nudes and the Ripper theories go hand in hand today. In Portrait of a Killer: Jack the Ripper - Case Closed, crime novelist Patricia Cornwell shoddily “solves” the mystery of the Ripper murders primarily by seeing Sickert’s paintings as a long confession of the crimes. Sickert contributed to this theory by calling one painting The Camden Town Murder sometimes and How Will We Pay the Rent? other times. Everything hinges on whether the woman is alive or not. The other nudes in Sickert’s oeuvre, such as Mornington Crescent Nude (above, from 1907), thus become additional examples of his “violence” against women. Of course, to accept that, you need to see Sickert’s impasto style as violent rather than an aesthetic choice he picked up from Degas, who himself has been accused of misogyny. I see a lot of Degas in the painting above, especially in the beautiful use of blue and the almost pulsating brushstrokes. The painting just seems too alive to me to believe that the woman is dead.

Sickert continued to drink in influences as he himself began to become an influential painter and teacher of other artists. Sickert founded the Camden Town Group shortly before World War I, helping bring the ideas of Expressionism and Post-Impressionism to England. In Mornington Crescent nude, contre-jour (above, from 1907), Sickert takes the impasto so far as to obliterate the woman. The vibrant color of his Degas-inspired nudes gives way here to dreary browns, expressing the impoverished lifelessness of the poor so prevalent in Victorian England. Again, such obliteration later served as more “evidence” in the case for Sickert being the Ripper. Reading such motives into paintings is always problematic, with the sensationalism of a famous murderer adding another dimension of speculation. Divorced from all the theories, Sickert’s nudes represent some of the most innovative approaches to the human body in modern art, setting off a chain reaction in British art that continued through Francis Bacon down to Lucian Freud even today.

My professor in the lone Fine Art History course I took (French painting from Impressionism to Surrealism) talked a lot about Degas' "Misogyny". She thought it was poetic justice that even though Degas painted his dancers in compromised "ugly" positions, the beauty of the female form came through. That's what I see in these Sickert paintings as well. Maybe Sickert was trying to get across some message of abuse or murder or hatred of women. But what I see is the beauty of the light in the scene. I feel like he captures what the light would be in that room, even if the stuff is dingy.

Thanks, as always, Bob.

I saw The Camden Town Murder in a museum. I think it was at Yale.

The connection to him as the killer makes the painting all that much more provocative.