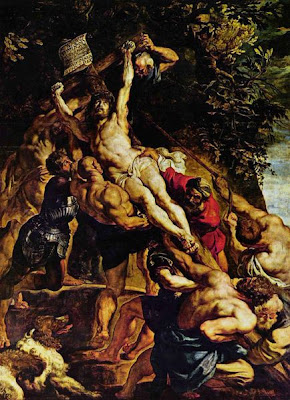 As much as being knighted is an honor, being knighted twice has to be a surreal experience. Born June 28, 1577, Peter Paul Rubens knelt before both Spain’s Philip IV and England’s Charles I and rose a knight of each of those realms in appreciation for his diplomatic service. Rubens helped bring not only peace to Europe but became a self-appointed ambassador of art, bringing not only his own artwork across borders but also the works of others. Not least of all, Rubens enlisted in the battle for Europe’s collective soul, fighting on the side of the Counter-Reformation with such works as The Raising of the Cross (above, from 1610-1611), a Baroque bombshell that fused the heavenly Renaissance reach of Michelangelo with the grounded earthiness of Flemish painting. Rubens often seems more than one man, present everywhere, fighting for every cause, and influenced by and influencing everyone. 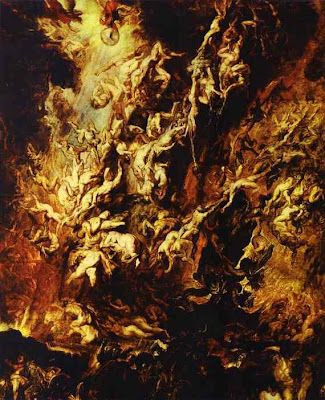 Rubens’ trip to Italy in 1600 shaped him irreversibly into the artist we know today. From the older works of Michelangelo, Raphael, and da Vinci to more recent works by Tintoretto, Veronese, and Caravaggio, Rubens saw and understood them all. For the rest of his life, Rubens affected an adopted Italian-ness, often writing to others in Italian and even signing his name Pietro Paulo. In The Fall of the Rebel Angels (above, from 1618-1620), Rubens seems to rewrite Michelangelo’s The Last Judgment by presenting the “first judgment” in which God banished Lucifer and the rebellious angels from Heaven. The writhing bodies seem to fall in thick chains of flesh into the fiery depths. The powerful diagonal Rubens uses almost acts like a slide upon which the fallen angels descend into perdition. Rubens’ painting serves notice to all those mortals who would follow Martin Luther of the fate once bestowed on heavenly beings that may also await them. 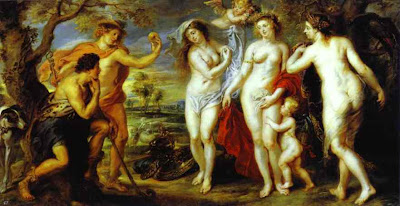 For all his contemporary influence in so many fields of endeavor, what we think when we hear the name Rubens today is the curvy, sensuous, classically Rubenesque female nude, as displayed and judged in The Judgment of Paris (above, from 1639). Rubens appreciated the late work of Titian when few others did. As wonderfully explained in Late Titian and the Sensuality of Painting (reviewed earlier here), Titian’s late works not only took on erotic subjects but also depicted them with a physicality rarely seen before and, therefore, misunderstood by Titian’s contemporaries. Rubens, however, saw the genius of Titian’s nymphs and danae and similarly freed his style (and mind) to the possibility of nudes expressive by brushwork rather than pose or composition. In The Judgment of Paris, Rubens shows exemplary judgment in stripping away all the influences he had amassed in his travels and getting down, like Titian, to the simple act of placing paint on canvas as an extension of the heart and soul. After so many years of battles and causes, Rubens retired to the confines of his own expressiveness.

I'm dying I must know who is the artist who painted these frescos in the vatican, I went on a tour they were by far the most intersting and most alluring pieces to me and a friend even though they were never discussed. If you an help please I will try and input an picture here if I can't please if you think you can help email me at tiffbiff5@hotmail.com