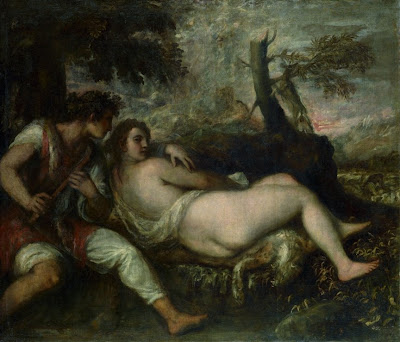 Listen to the final works of Beethoven–the last string quartets or the Ninth Symphony—and you hear a wholly different composer. Whether that difference came from Beethoven’s encroaching deafness, a philosophical epiphany born of a lifetime of experience, or both will always be a subject for debate. In Late Titian and the Sensuality of Painting, the last 25 years of Titian’s life undergo a similar debate. Did Titian’s new, freer brushwork originate from his failing vision and dexterity, the insights of age, both, or neither? Sylvia Ferino-Pagden edits this collection of essays accompanying a selection of works on display earlier in 2008 at the Kunsthistorisches Museum in Vienna and Gallerie dell’Accademia in Venice. Through the use of x-rays and infrared reflectography as well as cross-sections of the paintings, works such as Nymph and Shepherd (above) reveal not only the pentimenti (overpainted drawings) of such works but also the thought processes of Titian in his final years. In an essay examining Nymph and Shepherd as a classic case study of Titian’s final period, Elke Oberthaler writes, “As with no other painter, painting practice and technique in Titian’s late work have themselves been thematised and charged with meaning.” Late Titian and the Sensuality of Painting recharges Titian’s works with meaning for a modern audience more receptive to such technique than Titian’s own contemporaries. 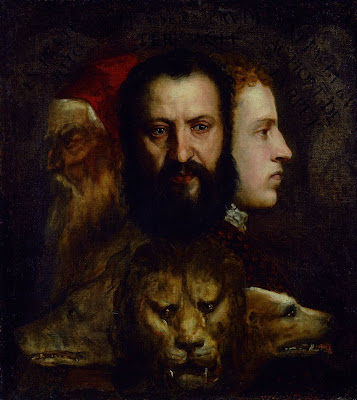 When a diplomat asked Titian why his later works differed so greatly from earlier ones, Titian answered that he gave up trying to match Michelangelo, Raphael, and others in refinement and beauty, aiming to make his mark with a new roughness of handling. “Thus, Titian’s visible brushwork is also his artistic signature,” Ferino-Pagden writes in her introductory essay. Titian’s Allegory of Prudence (above) visually depicts the artist’s concern with legacy. On the left, Titian paints himself as an old man, literally fading into the darkness. Titian’s son, Orazion, heir to the family painting workshop, dominates the center in the prime of his life, as Titian’s young nephew Marco appears on the right, full of youthful enthusiasm and indecision. The “prudence” allegorized here is more wisdom than caution, as Titian wisely recognized that his day had passed and his son’s sun was rising. Titian added the wolf, lion, and dog appearing below the portraits at a late stage, placing another layer of personalized mythology onto the image. Sadly, Titian and Orazion both died of plague in 1576, leaving the family workshop prey to looters and definitively ending the “school” of Titian. 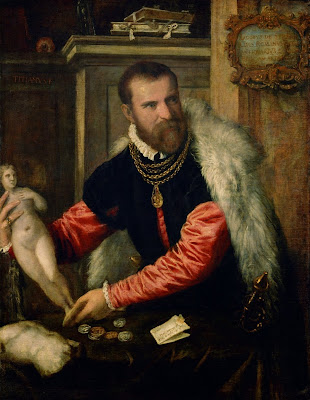 Titian’s late style brought him more grief than joy. Giorgio Vasari, who included Titian in his Lives after meeting the artist in 1566, believed that these late works damaged his reputation, clouding over earlier success. Augusto Gentili writes that Titian’s Venetian contemporaries saw Titian’s rough style as “a gratuitous and presumptuous offense, not only to the figurative, but also the civic tradition of Venice.” Venice’s favored son metaphorically betrayed his home and its artistic tradition in going his own way. By the 1560s, Titian lost most church commissions to the rising generation of artists that included Tintoretto and Veronese. Fortunately, private clients and old admirers still provided Titian with work, mostly in the line of portraiture, such as the portrait of the art dealer Jacopo Strada (above). Thanks to x-ray and infrared cameras, we can see beneath the surface of this portrait multiple changes, including additional figures. Titian originally made Strada’s expression “slightly less proud,” writes Wencke Deiters and Natalia Gustavson, and altered the composition to be more vivid arrangement in which “diagonals dominate the structure, lending the scene an atmosphere of both instability and dynamism.” As time slowed Titian’s body down, his artistic vision sped up, injecting more and more movement and energy into his works. 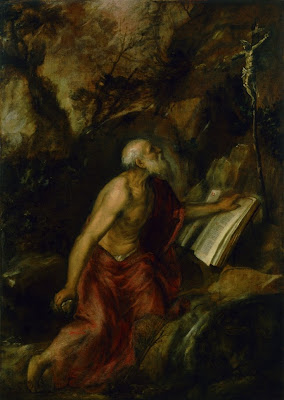 Not only Titian’s style but also his religious sensibilities precluded him from much church work in his late period. In “Titian’s Prudent Dissent: Painting Religion in the Disciplinary Years,” Augusto Gentili sees Titian as “openly hostile to the bureaucratic rules and theological subtleties both of the ‘Papists’ and the ‘Lutherans.’” Titian, thus, “tends toward an immediately understandable, highly individualist religion that is inevitably disturbing because subject to increasingly impelling forms of control.” To resist all control, Titian, like many of his contemporaries, gets back to basics in a “highly sentimental, Christ-centered religion.” In Saint Jerome in the Desert, Titian lends the saint his own face, which is turned in adoration to a crucifix. In the barren desert, Jerome/Titian “has abandoned everything—but not Christ, not wisdom,” Gentili writes. In such images, the rough brushwork mirrors the rough simplicity of Titian’s faith, which has been tested by fate yet remains strong. Titian intended for his tomb a Pieta in which he again appears as Saint Jerome, humbly touching the body of Christ, but it remained unfinished at his death. 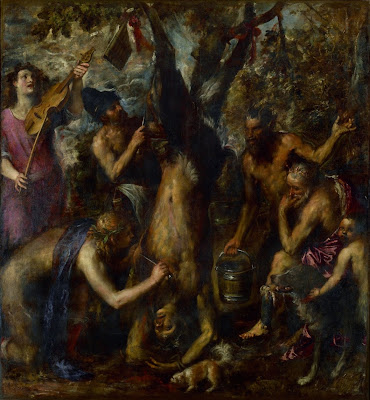 Titian’s faith in the power of art, however, seems to waiver at the end. In The Flaying of Marsyas, Titian combines two tales from Ovid’s Metamorphoses and casts himself as King Midas witnessing the torture of Marsyas. Titian chooses to show Midas not using his golden touch but, instead, watching violence impotently. “By painting himself as Midas,” Fernando Checa writes, “Titian is not only practicing self-criticism of his position as a court painter who loves riches,” but also “expressing profound criticism of his own nature as an artist.” As Sylvia Ferino-Pagden later puts it, “The artist may here have reflected on the power and powerlessness of art as an instrument in changing the world.” Such pessimism comes before even the death of his son and the apparent conclusion of his reputation. Fortunately, artists such as Rubens, Rembrandt, Velazquez, Delacroix, and even moderns such as the German Expressionists and Oskar Kokoschka, came to see the beauty and power of Titian’s late works, rediscovering them as the final exclamation point on a long career rather than the sad ellipsis Vasari believed them to be.

Late Titian and the Sensuality of Painting brings these amazing works to light with large, beautiful reproductions. A sense of Titian’s sensuality comes across not just in the poesia or eroticized mythological painting such as Nymph and Shepherd (top of post) but also in the lush, free gestures that give a sense of individuality that seems strikingly modern. Modern technology now allows us to look beneath the painted surfaces and glimpse into the mind of the artist himself, permitting us to know Titian’s thinking better perhaps than even his contemporaries did. The essays in the catalogue, ably translated from the original German and Italian, lose nothing in translation in terms of explaining the genius and continued relevance of Titian.


[Many thanks to Marsilio Editori for providing me with a review copy of Late Titian and the Sensuality of Painting and to Civita for the images above.]

Dear Bob, I want tell you something about a young Italian artist really surprising: Giovanni Gasparro. An artist who knows well the painting technique of the Ancients and use it to explore the anxietys of modern man...
Read an article and see images of his works on: