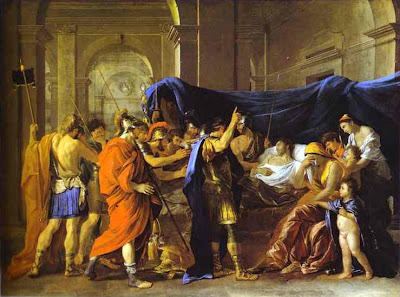 Ever since I read T.J. Clark’s The Sight of Death: An Experiment in Art Writing (a fascinating, if unsatisfying work I wrote about earlier here), I’ve had a much greater appreciation for the work of Nicolas Poussin. Born June 15, 1594, Poussin brought a combination of extensive learning and painterly skill to his works that gives them a different feel from the works of more emotional, expressive artists. If Poussin appeared on Star Trek, he’d most definitely be a Vulcan–calm, cool, and supremely rational. In works such as The Death of Germanicus (above, from 1627-1628), Poussin portrays a scene of classical history with stunningly little drama. The actors seem like statues rather than people. Despite this immobility, Poussin’s works move us with their clarity, precision, and balance. Each Poussin work is a whole world unto itself, rationally ordered and clearly composed even in the face of the final chaos—death. In his book, Clark sought out Poussin as the voice of reason for a post-9/11 world, ultimately failing in the exercise, just as Jacques-Louis David did when he tried to invoke Poussin’s classicism in his Neo-Classical propaganda for the French Revolution before things got out of hand. 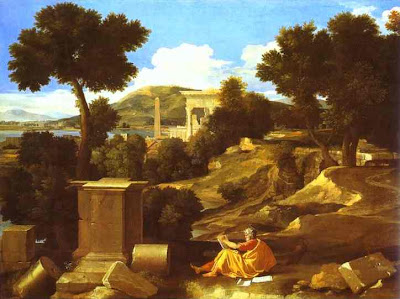 Clark’s deep readings of several works by Poussin taught me to look at all paintings for depth of field. Unfortunately, few artists other than Poussin provide enough content to encourage and reward such readings. In Landscape with St. James in Patmos (above, from 1640), the landscape stars as much as the saint. The surroundings actually dwarf St. James as we look deeper and deeper into the picture, finding layer after layer of reality. When you really look deeply into a Poussin landscape such as this in person, it feels sort of like being Alice stepping through the looking glass and finding yourself in a wholly different plane of reality. Poussin almost visually takes you by the hand in his compositions, which often zig-zag into the distance and draw you deeper into the painting. 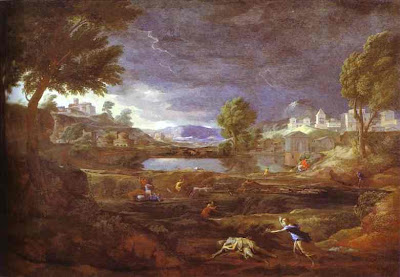 A redeeming feature of Clark’s book was his extensive use of blown up details of Poussin’s art, which overcame the limitations of conventional reproductions. For example, Poussin’s Landscape with Pyram and Thisbe (above) seems impressive thanks to the figures and architecture woven into the landscape, but when you look at a specific piece of detail up close (go here), Poussin truly blows you away. Like an obsessive miniaturist, Poussin paints in every leaf and branch. And, yet, Poussin creates these small details with the simplest of gestures. You expect some kind of miniscule brushwork where, instead, a tiny flick becomes a window in the distance or a mouth open in horror. I tend to fall in love with the overly romantic or hyperexpressive in art, but I confess to an equal, if different, fascination with the reserve of Poussin’s art. It’s magically rendered, highly conceptualized comfort food for the soul, especially when the chaos of living, especially at modern life’s frantic pace, makes you long for a moment of clear, cool reason. Clark ultimately rejected Poussin’s art as an oasis in the spiritual desert of the Age of Terrorism, but I think he wishes he could allow himself just a moment of ease.