"Paint what you feel. Paint what you see. Paint what is real to you." Robert Henri’s words, as recorded by former student Margery Ryerson and published in The Art Spirit, continue to inspire art students and professional artists even today. When I interviewed Karl J. Kuerner, he quoted Henri more than his famous neighbor, Andrew Wyeth. Born June 24, 1865, Henri learned the classic realist technique at the PAFA and then Impressionism in Paris. By 1895, however, he disowned Impressionism in search of a style that spoke to him, arriving finally at a brand of romantic realism that became disparagingly and inaccurately known as the Ashcan School. Just one look at Henri’s Salome (above, from 1909), which shows a contemporary dancer in costume for the stage role, and you can see that Henri’s work was anything but down and dirty. Although some of his protégés—William Glackens, George Luks, and John Sloan—got gritty at times, Henri’s work exemplifies the elegance of a refined man with a common touch, who could find beauty in both Old Masters and young children playing in the street. 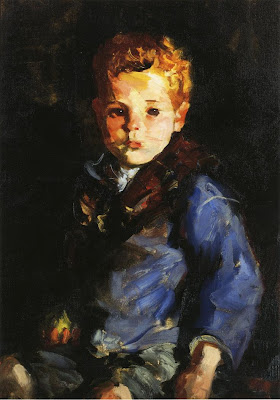 At the PAFA, Henri studied under Thomas Anshutz, the former assistant and (as we now know today) betrayer of Thomas Eakins. That connection gives Henri’s admiration for Eakins a whole new dimension. Eakins’ “iron will and his will to paint and to carry out his life as he thought it should go,” Henri wrote, “cost him heavily, but in his works we have the precious result of his independence, his generous heart and his big mind.” “’Integrity’ is the word which seems best to fit him,” Henri says of Eakins, adding that he considered Eakins “the greatest portrait painter America has produced.” In Henri’s portraits we see a similar integrity, yet with a freer style vastly different than that of Eakins. In The Irish Boy in Blue Denim (aka, Anthony Lavelle) (above, from 1927), Henri captures the innocence and freshness of the boy’s face, but in a style that not only harks back to his Impressionist days, but also seems influenced by all the other European modernist movements swirling around him. Henri always remained true to himself, but never failed to keep his eyes and his mind open to new experiences.

Henri the never-ending student made for one of the greatest art teachers in American art history. William Merritt Chase and Henri waged an unofficial “war” for the minds and hearts of American art students at the beginning of the twentieth century. It’s hard to declare a winner, but the track record of Henri’s greatest students—Glackens, Luks, Sloan, George Bellows, Edward Hopper, Rockwell Kent, and Stuart Davis, among others—speaks for itself. Henri’s painting The Art Student (above, from 1906), a portrait of Josephine Nivison, the future Mrs. Edward Hopper, shows the affection Henri had for all his students, to whom he taught the ways of life as much as the ways of art. "Art cannot be separated from life,” Henri told them. “It is the expression of the greatest need of which life is capable, and we value art not because of the skilled product, but because of its revelation of a life's experience." Such sentiments ensure that Henri’s spirit will continue to live on in the hearts of artists and art lovers.

Excellent Blog...glad I found a new source for checking out what's new and hot in the Arts...Thanks Bob for writing good content!!!