I really wished I could have made it up to New York City in time to see the recent Met exhibition of the works of Gustave Courbet. I’ve seen most of the famous works in Paris at the Musee D’Orsay, but seeing them all together once again would have been nice. Born June 10, 1819, Courbet seems to be undergoing a renaissance of sorts in America. In addition to the Met show, Abbeville Press recently published a lavish, slip-covered study titled simply Courbet (which I plan on reviewing soon) and Petra ten-Doesschate Chu’s The Most Arrogant Man in France: Gustave Courbet and the Nineteenth-Century Media Culture remains one of my favorite art history books from last year (which I reviewed here). Courbet made his name as a founder of Realism, but, like almost everything else about Courbet, even that Realism is a carefully constructed concept. As Chu’s book asserts, Courbet realized quite early that the quickest way to make a name for yourself was to literally “make” a name for yourself—i.e., to shape a persona for the press to present to the public. In the Self-Portrait known as At the Easel (above, from 1847), we see Courbet trying on his artist hat in the grand tradition of Rembrandt and countless others. Aside from the beautiful use of charcoal and stumping, this image fascinates me in showing just how self-aware Courbet is in depicting himself. Courbet never stops watching us watching him. 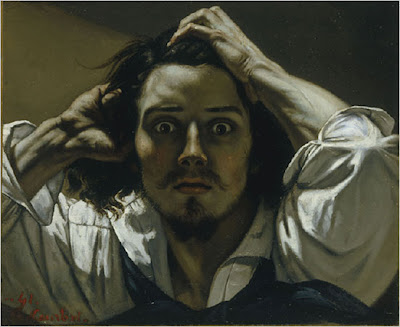 It’s easy to dismiss Courbet’s identity antics as a ploy along the lines of the worst media capers of Andy Warhol, Salvador Dali, or even Damien Hirst in the twentieth and twenty-first centuries. However, I believe that Courbet truly found himself lost in a sea of possibilities, straddling both the Romanticism and Neoclassicism of much nineteenth century French painting while also recognizing the new, socially relevant realism of Honoré Daumier and Jean-François Millet. In the Self-Portrait known as The Desperate Man (above, from 1843), Courbet adopts the persona of the mad artist, driven insane by his fragile artistic temperament. In reality, Courbet’s sturdiness served him well in allowing him to juggle all these influences and still find his own way. In Burial at Ornans (1849-1850), Courbet finally found his subject—the French people—and shaped that public reality in his hands as easily as he had shaped his own personal truths. 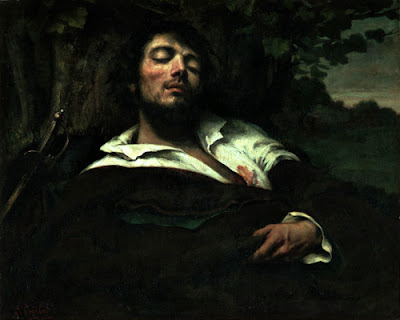 Courbet’s fluidity in terms of subject and style made him a source of wonder for contemporaries, followers, and admirers today. In the Self-Portrait now known as The Wounded Man (above, from 1844-1854), Courbet actually changed the painting drastically over time. Originally, Courbet placed himself beneath a tree lounging with his lover after a tryst. When that woman left him in 1852, Courbet changed the topic from love to death, painting over the woman with a think blanket of brown and adding a wound to his chest, symbolizing his wounded heart. Just twelve years after Courbet finishes this romantic scene, he paints the frankest, most realistic depiction of sexuality in The Origin of the World. (Sorry, no link. This is a family blog.) As much as critics try to cubby hole Courbet into periods and styles, it’s much easier to take him as one giant, complicated whole. While some artists depict their aging (Rembrandt) or their personal struggles (Van Gogh or Frida Kahlo) in their self portraits, generating a consistent narrative of who they are, Courbet ‘s only consistency is his inconsistency, making his self depictions perhaps the most honest of them all.