When the earliest archaeologists first tried to puzzle together dinosaur bones into the creatures that once roamed the earth, they had little to go on, resulting in, to modern eyes, hilarious arrangements. With equal sincerity, early antiquities conservators, faced with statues shattered into countless pieces and often mingled with other statues in the same find, pieced together those works based on what they knew and what they thought they knew, hoping for the best. As part of the upcoming exhibition Hadrian: Empire and Conflict at the British Museum, conservators took a fresh look at the statue of the Roman Emperor Hadrian (above) famed for its depiction of the ruler as a kindler, gentler sort and found something amiss. In the Guardian’s story, “How Victorian Restorers Faked the Clothes That Seemed to Show Hadrian's Softer Side,” modern restorers explain how their Victorian counterparts took the head of a statue of Hadrian, mounted it upon the statue of a woman, added hands from (perhaps) two entirely other statues, and came up with a depiction of Hadrian as a philosopher-king, besotted with his love of all things Greek. What went through the minds of the modern restoration team as they chipped through the plaster placed on the statue in the 1860s, working solely on the hypothesis that they were right and their ancestors wrong? As the Guardian story relates, scholars continue to cite this gentler Hadrian statue as proof of another side of the ruler. Now, decades of history based on false assumptions lay in ruins. 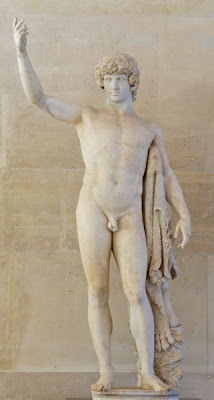 The Victorians searched for Hadrian the lover rather than the fighter thanks to the (in)famous love between Hadrian and the beautiful young boy, Antinous. Antinous drowned in the Nile before he turned twenty (murdered perhaps). In his mourning, Hadrian ordered statues to be made of his former lover throughout his domain. Entire studies, including Caroline Vout’s Antinous: The Face of Antiquity (which won the 2007 Art Book Award), catalogue the proliferation and variety of these statues of Antinous. (An example of the Antinous Braschi style from the Louvre appears above.) Perhaps because of modern ideas about bisexuality (Hadrian was married) and homosexuality, the Victorians needed to “soften up” Hadrian, literally feminizing him by placing his head on a woman’s body. Ancient attitudes towards bisexuality and homosexuality were vastly different from those of the Victorian age or today, of course, creating a disconnect that restorers hoped to bridge. The restoration of Hadrian in all his ruthlessness and hardness provides a whole new dimension not only on that ancient figure but also on the role of museums in perpetuating prevailing social attitudes. What stereotypes do museums continue to uphold, knowingly or not, through their curatorial and, as shown here, restoration choices? Hadrian’s “decapitation,” nearly two millennia after his death, frees us to look him in the face, as well as ourselves.