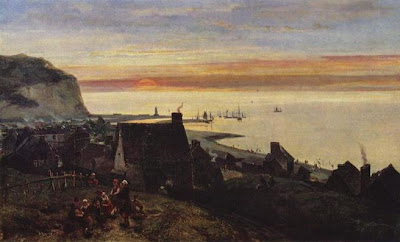 When Claude Monet decided to join the French cavalry in Africa in 1861, signing a seven-year commitment, the chances that his fledgling career as a painter would succeed looked slim. When Monet contracted typhoid, the aunt who took Monet in after the death of his parents offered to get him out of the army if Monet enrolled in an art school. Monet’s aunt got the idea for the deal from a friend of Monet’s who believed in his art when few others did—Johan Jongkind. Born June 3, 1819 in the Netherlands, Jongkind spent most of his career painting in France, befriending fellow artists such as Monet, who saw paintings such as Jongkind’s Etretat Harbour (above, from 1852) while formulating the ideas that would flower into Impressionism. Monet called Jongkind the “master.” Etretat Harbour doesn’t look much like a Monet, but if you look at the horizon, flooded with the atmospheric effects of the sunset through the multicolored clouds, you can see the beginnings of the Impressionist style. 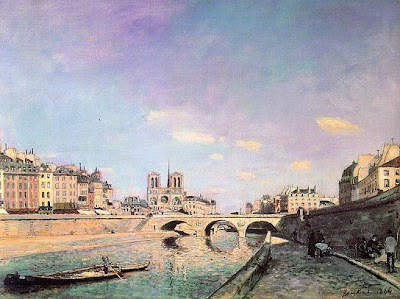 Would there have been a Monet or Impressionism as we know it without Jongkind? Monet hardly seems cut out for the military and too many people, from Corot to Manet, were thinking along the same lines for Impressionism and Monet to not have existed in some form eventually. However, the form we know owes something to Jongkind and works such as The Seine and Notre-Dame in Paris (above, from 1864), which certainly suggested the possibility of taking open air painting to an urban setting, thus finding beauty not just in the forest of Fontainebleau but on the streets of Paris, too. Struggles with alcohol and depression contributed to Jongkind’s lack of personal success, despite critical praise from tastemakers such as Baudelaire and Zola. In 1863, Jongkind married his fortunes to the young antiestablishment movement led by Manet and exhibited at the first Salon des Refusés. Acceptance into Impressionist exhibitions, however, eluded Jongkind for most of his career. 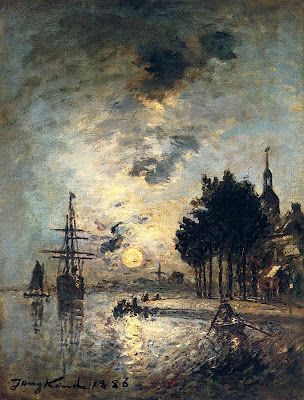 By the last few years of his life, Jongkind was painting in a recognizably Impressionist style in works such as Clair de Lune (above, from 1886). Monet the student had become Monet the teacher for Jongkind. The clarity found in seascapes such as Etretat Harbour thirty years before gives way to the free brushwork and overall suggestiveness of full-blown Impressionism in Clair de Lune. Declining health and fortunes forced Jongkind and his wife from Paris to live in a small town for his final years, far from the excitement of Parisian art circles and the latest movements. Twenty years older than Monet, Jongkind was born just too early to be part of that young man’s revolution but not early enough to be lauded as a true precursor. If nothing else, we may have Jongkind to thank for Monet the painter and not Monet the failed cavalryman.