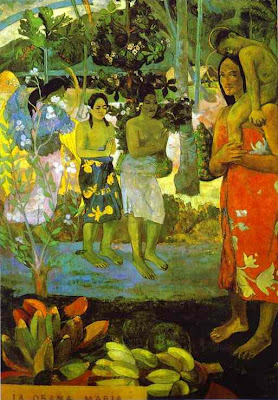 Paul Gauguin, nearly penniless and largely unknown as a painter in his native France, fled to the primitivism of Tahiti in 1891. Born June 7, 1848, Gauguin was reborn in that native environment, finding the perfect subject for his unique Post-Impressionist style. The Christianity that haunted Gauguin in France and inspired works such as The Yellow Christ in 1889, inspires Ia Orana Maria (Hail Mary) just two years later (above, from 1891). The highly sensual artist certainly had an eye for the native women, whose non-Western ideas regarding sexuality made for a paradise for Gauguin. Gauguin recasts the role of the Virgin Mary by inserting a native woman, who is most certainly not a virgin or even entertains virginal ideas. With such works, Gauguin proposes a new gospel of love, both sacred and profane, that accepts all pleasures and denies none. In his oceanic Eden, Gauguin found a new Eve, a new Virgin Mary, and a new vision of spirituality. 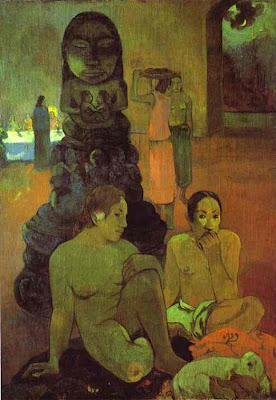 Gauguin returned to France only once after setting foot in Tahiti, and that seems to have been enough for him. Upon returning to the native life, Gauguin vowed to never paint again except to distract himself from the toil of existence. Reset in his new Eden, Gauguin further explored his new sense of religion, casting off the Christian trappings of earlier works entirely and bluntly asking the big questions in what I consider his greatest work, Where Do We Come From? What Are We? Where Are We Going? (from 1897). Gauguin’s turn away from the church of his youth progresses to the point that he half-embraced other faiths, or at least their imagery, in works such as The Great Buddha (above, from 1899). A native idol stands in place of the chubby religious icon, but it is the native people around the statue that seem the most Buddha-esque here in their eerie serenity, which Gauguin must have observed closely and hungrily desired for himself as his personal situation worsened. If Gauguin came to the islands looking to exploit the natives and their relaxed sexual mores, he soon realized that their greater treasure lay in the uncomplicated peacefulness nestled deep in their souls. 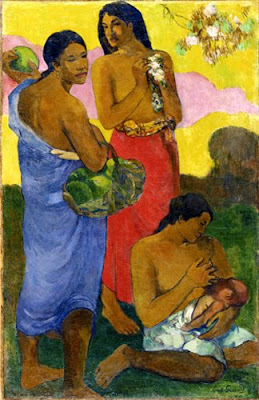 That beautiful peacefulness appears most beatifically on the faces of the women in Gauguin’s late works. After the death of his daughter, the failure of his own health, and his own attempted suicide, Gauguin sought out solace and answers in the native women. In Maternite II (above, from 1899), Gauguin cuts away all the complications of existence and bares it all down to the fundamental truths of birth and love, here symbolized by three native mothers. The woman on the left seems lost in tranquility as the woman on the right concentrates on nurturing her child. The woman in the center, however, looks out at the viewer directly with an enigmatic expression on her face. Does she sneer in disgust at the self-degradation embedded into Western sexual repression? Or do her features register pity for the life such societies deny? Gauguin may have intended both, as both emotions flowed through his mind as his own life drew to a close. The caricature of Gauguin as a sex-mad intruder in a garden of innocence bears some truth, but his time in that land of enchantment transformed him and his views of the power of women and so-called primitive life.