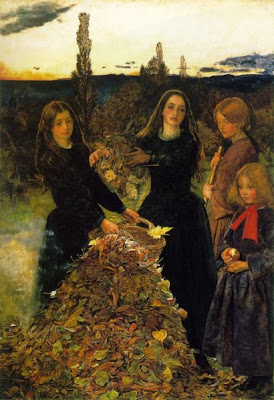 When I first got hooked on the Pre-Raphaelite Brotherhood, Dante Gabriel Rossetti stood above all the others. Both painter and poet of note, Rossetti’s over-the-top verse and hazy portraits of red-headed stunners struck a chord with my Romantic sensibilities. Over time, however, and thanks to the Tate Britain’s recent exhibition (the catalogue for which I reviewed here), John Everett Millais has become my favorite Pre-Raphaelite. Born June 8, 1829, Millais showed early promise that caught the eye of John Ruskin with such works as Autumn Leaves (above, from 1856), which Ruskin called "the first instance of a perfectly painted twilight." Aside from the wonderful coloring and atmospheric effects that enticed Ruskin into believing he’d found the heir to J.M.W. Turner, Millais always includes a sexual aspect behind the staid Victorian façade. For me, Millais is the quintessential Victorian painter through his ability to merge respectability and sexual energy into a image that maintains the tension always beneath the radar of Victorian life. In this painting, the vital, young girls gather together dead leaves—the symbols of decay—while the youngest girl holds an apple—the symbol of Eve’s fall from grace and the “beginning” of sexual knowledge. It’s that sexual subtext that brings me back again and again to Millais more than to his contemporaries. 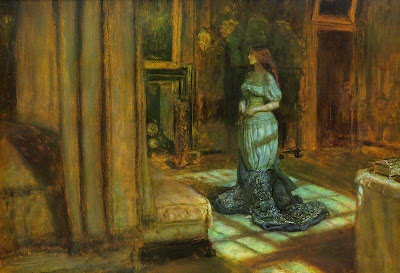 Like Rossetti, Millais knew classic literature inside and out. His Ophelia may be the finest single painting based on Shakespeare's Hamlet. I doubt anyone will argue that Millais’ The Eve of Saint Agnes (above, from 1863) is the finest representation of John Keats’ 1819 poem of the same name. On the eve of the feast day of Saint Agnes, the night of January 20th, virgins allegedly could see their future husbands in their dreams if they performed certain rituals. In Keats’ poem, Porphyro, suitor of Madeline, the virgin of the poem, makes her dreams come true, but not before secretly watching her undress for bed—the moment that Millais paints so dreamily here. Keats’ publisher actually asked him to tone done the sexuality of his original version, but Millais, if anything, amplifies the volume of sexual tension, “hiding” the sexual subtext behind the medieval trappings and literary allusion. 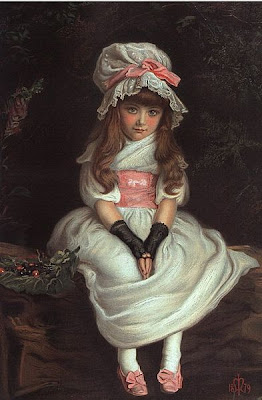 Millais’ reputation takes a hit most often for his commercial work, which often took his depictions of children, such as Bubbles, and transformed them into advertisements for soap, etc. However, even these images of children contain a sexual subtext. Cherry Ripe (above, from 1879) seems almost laughably blatant and terribly troubling today in a JonBenet Ramsey-esque sort of way. Millais tarts up this little girl as if she were actually a ripening fruit. Childhood molestation and prostitution troubled Millais’ time perhaps even more so than ours today. On one hand, these images became selling points for products—literally selling the sexiness of children. On the other hand, they depict children as knowing, developing beings and not just living furniture, an approach that would inspire other artists, such as John Singer Sargent, to paint equally psychologically probing portraits of children. Millais is one of those great artists that we’re still discovering almost a century after his death.
Posted by Bob at 12:01 AM

"The Eve of St. Agnes" is a favorite poem of mine, and I wasn't aware that Millais had painted it so beautifully. In the painting as in the poem, Madeline seems more the dream of Porphyro (as well as the artist/poet and the viewer/reader)than the other way around. Thanks for pointing me toward this gorgeous work!