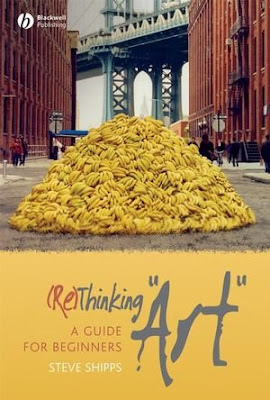 Imagine your walking somewhere, turn a corner, and find a pile of tens of thousands of bananas dumped in a street. Someone has provided bags for you to take bananas from the pile. From a distance, someone films you taking the fruit. Is this a crazy dream? Or is it reality? If reality, can it be considered art? Award-winning educator Steve Shipps places artist Doug Fishbone’s unusual banana “art” on the cover (above) of his (Re)Thinking “Art”: A Guide for Beginners as a beginning point for an in-depth examination of art told in plain, lively language. Shipps thinks about art and then thinks about thinking about art in a way that will get beginners to stop using those air “quotes” and will allow seasoned art thinkers to reevaluate and, hopefully, reaffirm their love for art. Once an artist himself, until his personal “skepticism took over,” Shipps turned to teaching to rediscover his own artistic “faith” and “dreamt up a course aimed at helping students who shared my bewilderment about the whole idea of ‘art.’” (Re)Thinking “Art” puts that course in handy book form so we can all look at art afresh or refreshed.

Shipps sets out by clanging the gong of artistic doom, raising the specter of the “end” of art—a concept raised by art like that of Fishbone’s. “This is not the first time that serious thinkers-about-art have suggested that ‘art’ was over (far from it),” Shipps writes. “But it may be the first time that the situation that gives rise to the idea has been so readily recognizable, empirically, to those of us who are not professional theorists about it.” So much post-1980 art resembles “non-art” (Fishbone’s bananas look just like the ones in my kitchen) that “the effort” to think about art “seem[s] hardly worth the trouble.” Shipps, however, shows exactly how that effort is well worth the trouble. Going all the way back to the Greeks idea of “techne” and the Romans concept of “ars,” the roots of the classical idea of “mimesis”—the mirroring of nature—Shipps navigates the long history of humans making art and thinking art in engaging text that eschews technical art history lingo for straightforward explanation and argument. I admire the way that Shipps, clearly a well-read academic, clears the cluttered closet of art history terminology and himself rethinks ideas to restate them in accessible language for learners at all levels. Even if you’re familiar with the concepts, Shipps’ reconfigurations will make you think about them once again. 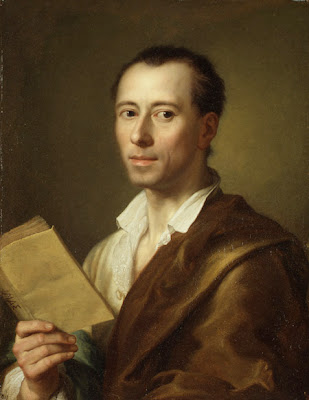 Taking nothing for granted with a sharply funny sense of skepticism, Shipps resurrects Johann Joachim Winckelmann (above, in a portrait by Raphael Mengs, from 1755), the “father” of art history. Seeing art history as a subset of the larger Enlightenment “fascination with what had come to be thought of as the defining quality of secular humankind—its capacity for having ideas,” Shipps rejects the idea of a neutral art history and instead sees art historians’ choices regarding what is art progress “ever close to the interests and the vision of the people doing the selecting.” The elitism of the art historians, in Shipps’ view, replaces the elitism of the wealthy patrons that previously dictated the prevailing tastes in art. That same elitism continues today, driving away the “regular” people who wish to know art better. For those who argue that today’s art world is a huge “game” played for high stakes by insiders, Shipps responds that, thanks to historians’ choices, all art throughout time “whether actively or passively, whether in the moment or centuries after the fact” also “played the game.” 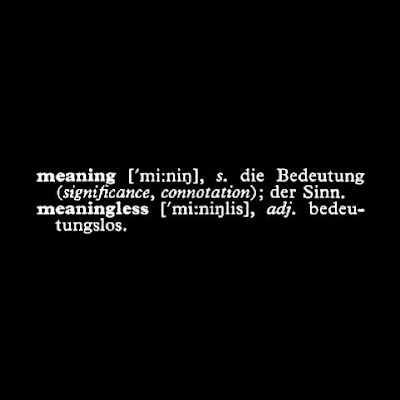 Standing at the edge of the abyss of all art as a game—either totally meaningless or exploding with infinite possibilities of meaning—Shipps then guides the reader through a crash course in semiotics, making even Saussure and Jakobson seem like fun, something I never dreamed of as an undergraduate. Conceptual art such as Joseph Kosuth’s Art as Idea as Idea (Meaning) (above), a simple reproduction of the dictionary meaning of the word “meaning,” thus drives home the idea of all human creations, including art, as being embodiments of ideas couched in language. Meaning, therefore, is relative, or as Shipps puts it, “as far as we can empirically tell—we’ve made it all up.” Later, appying psychologist Mihaly Csikszentmihalyi’s idea of “flow” (“direct, unmediated experience of whatever is going on in the moment”) to artmaking, Shipps then shows that “art becomes the pure, unsullied experience of what it is that humans—any humans—definitively do.” “Art, seen thus, is not just ambiguous in its meaning,” according to the semiologists, but “its meaning is… entirely open, to be determined by whomever chooses to bring her consciousness to bear and do so.” Modern art, in its long quest for the essential essence of art itself, bares it all down to the fundamentals—the work and the viewer, freed of all intermediaries. Thus, “there’s no way to get art ‘wrong,’” Shipps says in the end, saving art from the elites and, hopefully, tempting the fearful back into the galleries. 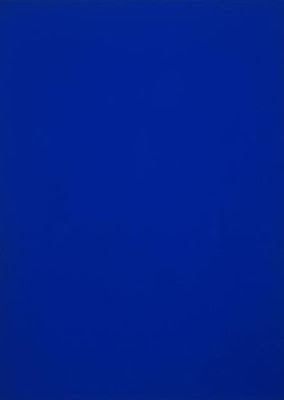 Shipps’ ultimate goal is to get his students to have confidence in their own reactions and opinions to art. Standing in front of a work such as Yves Klein’s all-blue paintings (above), the viewer can feel nothing or a whole range of experiences. After all the theorizing, Shipps provides a section of pragmatics, calling for the student of art to pay “art attention” to a work, allowing himself to truly engage with the work and live in the moment (go with the “flow”). “Doing so truly can be, when it happens, a reaffirming experience like no other,” Shipps promises. “’[A]rt’ is anything but an elitist activity, by its nature… [I]t’s a fundamental—perhaps the fundamental—human one,” Shipps almost screams from the page, sounding a note similar to that of Bill Ivey in his Arts, Inc.: How Greed and Neglect Have Destroyed Our Cultural Rights (which I reviewed here). Both Shipps and Ivey want the individual to recover their relationship to creativity and reunite with the imagination in a way that adds value to everyday life. “To the extent that we dismiss ‘art’ as an irrelevant and elitist pursuit, we dismiss too the possibility of supposing ourselves as artists, of whatever kind and—this is important—to whatever degree,” Shipps believes, “In slipping into such a mindset [of not being an artist or artistically minded], we dull and delimit our inherent ability to ‘suppose,’ in a world that, safe to say, needs all the (re)imagining, all the ‘supposing,’ it can get, in all sorts of ways.” In short, if you can imagine new possibilities in a Picasso, you can imagine a world free of hunger, war, and terrorism. If you can imagine things that even Dali never considered, maybe you can imagine a female president, or a black one. If you’ve never thought about art before or think about it every day, Steve Shipps’ (Re)Thinking "Art" will have you thinking about art in ways you’ve never thought of before.

[Many thanks to Wiley-Blackwell Publishing for providing me with a review copy of Steve Shipps’ (Re)Thinking “Art”: A Guide for Beginners.]