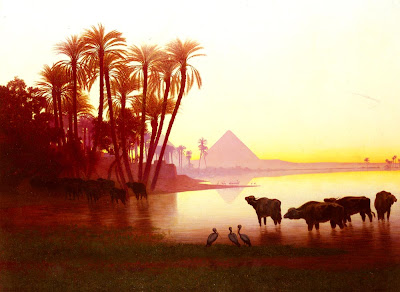 When I recently auditioned for Jeopardy!, I wowed the crowd by answering a question about the Kaaba, Islam’s most holy place around which pilgrims during the Hajj walk around and around. I felt good about knowing that little bit of trivia, of course, but later I realized that it’s anything but trivia to millions of people in the world. If someone trivialized Vatican City, I’d feel marginalized. After 9/11, I did what I always did when faced with chaos—I read more about it. From Bernard Lewis to Edward Said, I read the whole spectrum of views on the Middle East. I’m not sure I’ll ever “understand,” but at least I now know a Shiite from a Sunni, something even some presidential candidates don’t. In the nineteenth century, European artists viewed the Middle East with awe, finding a wholly other subject full of energy and beauty. Born June 21, 1814, Charles-Theodore Frere belongs to the generation of French artists called the Orientalists, who traveled to the Middle East and brought home images such as Along the Nile (above, from the 1850s) to a wondering public. If only the Edenic beauty of Frere’s sunlit-bathed scene, complete with pyramids in the distance, could find a similar place in the West in the Age of Terrorism. 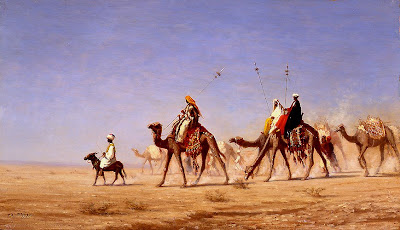 Frere began as a painter of conventional Parisian scenes, studying under the genre painter Paul Delaroche. After a trip to Algeria in 1837, however, Frere was hooked. After 1850, Frere submitted to the Salon only scenes of the Middle East’s people and culture. A Caravan Crossing the Desert (above, from the 1850s) captures the electricity of the trek across the desert, complete with exotic desert garb. In addition to his eye-catching subject matter, Frere drew attention to his work with stunning draftsmanship. The confident brushstrokes stand up to those found in the works of another French Orientalist— Jean-Leon Gerome. I also love the whole sense of movement from right to left, complete with sand kicked up by the animals, as well as the almost humorous touch of the figure on a donkey leading the men mounted on the towering camels. 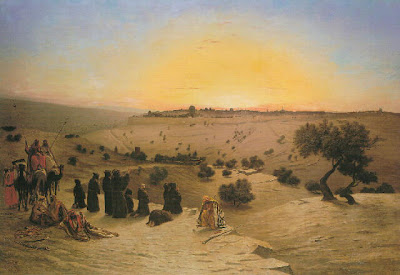 Ever since the days of Napoleon’s adventures in Egypt and the discovery of the Rosetta Stone, the French fascination with the Middle East has linked them. Despite the sad war for independence in Algiers, French remains the second most commonly spoken language in much of the region. Frere’s name faded soon after his death, consigning most of his work to be lumped in with the rest of the “lesser” Orientalists as the novelty of the genre dissipated. As the novelty wore off, unfortunately, much of the desire for understanding followed. Today, works such as Frere’s Pilgrims Worshipping Outside Jerusalem (above, from the 1860s) should remind us of what once was and, hopefully, could be once again—namely, a mutual respect and understanding between East and West based on the exchange of cultural treasures.