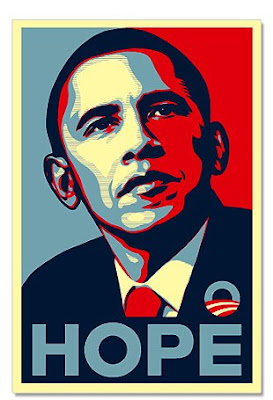 There’s something vaguely early twentieth century Russian about the Obama poster above, with the single word “Hope” beneath the stylized portrait. But it’s one of the first interesting visuals in what will now be another “interesting” campaign for President in America. Barack Obama, the first African-American candidate for President, not only has to face today’s problems but the whole sad history of American race relations. As much as his nomination represents a giant step forward for our country, I fear two giant steps back when the ugly face of racism, which has been welded to our national DNA since Europeans first stepped onto these shores dragging chained Africans behind them, reveals itself.

Anyone who’s been reading this blog for any length of time knows my feelings about politics, so no rant is necessary here. Some people trace Republican capitalization on racism back to the Southern Strategy. I trace it back to Rutherford B. Hayes, the (first) stolen election of 1876, and the abandonment of Reconstruction, dooming our country to reel from the wounds of the Civil War even today rather than allow them to heal once and for all. The visuals of this election, like all elections, hold the promise of the good, the bad, and the ugly, but the ugliness of this election may more fully reflect the ugliness deep within the American soul than any other.

Growing up in heavily Democratic Philadelphia (all Democratic mayors for nearly the last 70 years), I’ve seen several mayoral elections that should have been about the good of the city suddenly become referendums on the candidates’ skin colors. Fortunately, all those elections have ended well. I’m hoping that those campaigns were a prophetic microcosm of what will happen this November. I believe that we as a nation can vote not, to take a phrase from Martin Luther King, Jr., “by the color of [our] skin, but by the content of [our] character.”

All I know for sure now is that it’s going to get uglier before it gets anywhere near beautiful. Remember Masefield’s words in those rough times over the next five months: “Hope that endures becomes a hope fulfilled.”
Posted by Bob at 6:56 PM

Well this one reminds me of Bob Marley. Maybe its use of colors. But still a good poster for Obama.

The poster does send a bit of a chill down the spine. Your observation that it harkens back to early 20th century Russia is spot on with Obama's Marxist philosophy. Obama's nomination is a long-overdue milestone in our history (women will have to wait a little longer!), but please don't play the race card already. People can criticize the candidate's philosophies and politics, but that doesn't mean such critics are racists. If you want racism, you need look no further than what has been preached at Mr. Obama's "former" church.

P.S.: I hope this comment goes through. I've tried numerous times to post comments on this site, but for some reason they don't get posted. I'll chalk it up to technical difficulties, not censorship. :-)

Just a follow-up: seeing as my comment did get posted, I now realize it was my own technical glitch that prevented my previous comments from being posted. My apologies!

Congratulations on a very nice site -- it's a pleasure to visit.
~Voice of Reason

For the record, I do not censor comments. Haloscan, the comments system Blogger uses, is notoriously iffy. Please also expect a delay sometimes in having your comment appear. Certain work servers also aren't Haloscan-friendly.

I don't believe I was playing a race card. I was merely stating how some individuals have historically played the race card and may play it again. There's really no debate about the existence of the Southern Strategy since it's been openly discussed (and even bragged about) since Lee Atwater.

My comment about the Russian-ness of the poster was more about the aesthetics and not about ideology. The idea that Obama is a Marxist is as laughably senseless as the misrepresentation of him as a Muslim, and just as targeted to play to old prejudices. Pressing the "commie" button is as absurd as "playing the race card."

But thanks for reading and commenting.