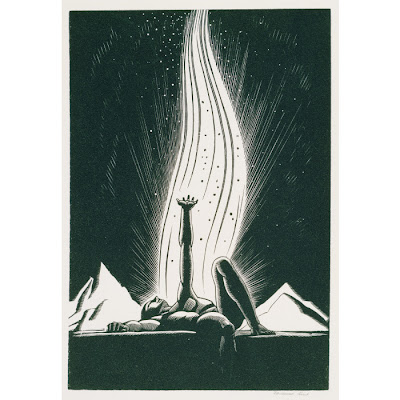 One of the best and worse things someone can call you is a “troublemaker.” It all depends on who’s doing the name-calling. During his lifetime, enough of the wrong people called Rockwell Kent a troublemaker to ensure that he was the “right” kind. Born June 21, 1882, Kent studied art under some of the greatest American teachers of his era, including William Merritt Chase, Robert Henri, and Abbott Handerson Thayer. Kent internalized not only the skills they taught him, but also their humanist spirit. In many ways, Kent stands as the American version of William Blake, another famous troublemaker. Kent’s Flame (above, 1928) seems like a reincarnation of Blake’s figures that yearned to fulfill humanity’s full potential against the oppressive powers keeping the everyman and woman down. Blake didn’t start the fire, but Kent kept it burning brightly in the early to mid twentieth century as America began to find its footing as a true world power. 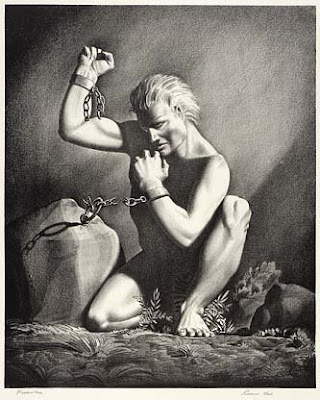 Kent claimed to be a transcendentalist long after Ralph Waldo Emerson and Henry David Thoreau were gone. His illustrations to Herman Melville's Moby-Dick and Walt Whitman’s Leaves of Grass emphasized the transcendental aspects of those works and reinvigorated them for his generation. Kent’s striking illustrations for Moby-Dick especially contributed to the rediscovery of that work as scholars sought to shape an American culture in the 1920s to match the burgeoning American power between the wars. Kent’s Prometheus Unbound (above, from the 1920s) echoes not only Percy Bysshe Shelley’s take on the subject but also Blake’s idea of the “mind-forg’d manacles” that enslave humanity from within, i.e., the internalized constraints that we impose on ourselves and can only break ourselves. Just as Prometheus brought the spark of fire to humanity and paid for it with his freedom, Kent, too, paid for trying to light a spark in the lives of Americans, earning the brand name of communist and the unwelcome attention of McCarthyism, scourge of “troublemakers.” 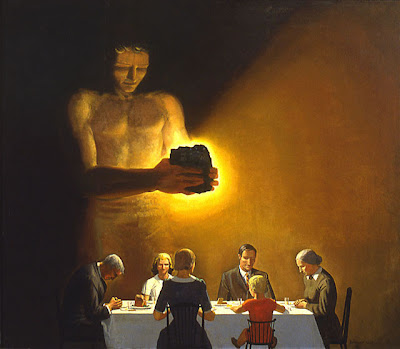 Kent’s personal humanity is often lost in all the activism. In the 1920s, Kent actually published light-hearted cartoons under the pen name "Hogarth, Jr." that poked fun at the excesses of the Jazz Age. Kent travelled extensively, from Alaska to Tierra del Fuego to Greenland and more, always connecting with the local people and culture, demonstrating a common touch to belie the perception of him as an intellectual “elitist.” Above all, Kent’s love for the ideal known as “America” burned so strongly that it could border on the corny. In Baker of the Bread of Abundance (above, from 1945), Kent gets almost Norman Rockwell-ish in his admiration for simple domesticity and, perhaps, even religious in his otherworldly figure hovering over the family as a makeshift household god. Despite attacks on Kent as “Un-American,” he was, if anything, hyper-American, dreaming of a utopia that the reality around him never lived up to, but which he never failed to work towards.