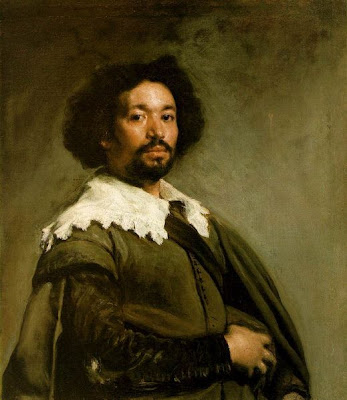 Before his coming-out party at the Monterey Pop Festival, Jimi Hendrix was the musician’s musician that nobody but musicians knew about. It’s always fascinating to discover these hidden geniuses in any genre. In the nineteenth century, Diego Velazquez was the Jimi Hendrix of portraiture, the great artist only the initiated knew and worshiped. Baptized June 6, 1599, Velazquez certainly had a reputation as an artist, having painted royalty during his day and having his works hang in the Prado centuries after his death. But when artists such as Thomas Eakins and Edouard Manet traveled to Spain, it was Velazquez they sought out and learned from. Velazquez portrait of Juan de Pareja (above, from 1650) revolutionized the psychological and pictorial power of the portrait. de Pareja’s almost glow with intensity. The white of his collar almost explodes in contrast to the dark tones all around. de Pareja’s worked for Velazquez in his workshop and clearly the two shared a friendship. Velazquez made his money painting kings and popes, but he made his mark with future artists in portraying the nobility of such figures as the former slave de Pareja. 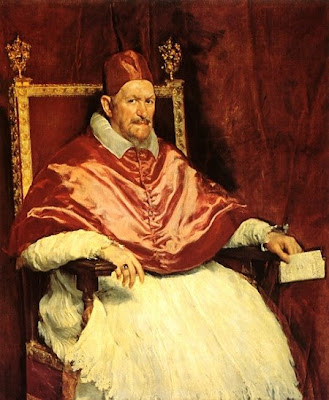 In fact, it was the portrait of de Pareja, which was displayed in the Pantheon in Rome in 1650, that caught the eye of Pope Innocent X, who decided that Velazquez was the painter for him. In Velazquez’s Portrait of Innocent X (above, from 1650), Velazquez captures all the trappings of papal power while still conveying the humanity of the subject. Although nearly 75 when he sat for Velazquez, Innocent was as famous for his vitality as for his vulgarity. Innocent’s infamous temper came with a cunning intelligence that you can read in his eyes as Velazquez painted them. You sense that Innocent knows he’s a powerful man and enjoys that power, yet still struggles with self-doubt and, perhaps, self-loathing. In the twentieth century, Francis Bacon picked up those dark elements of the portrait and painted his "Screaming Popes" series—a primal scream that the original himself might have enjoyed, as catharsis if nothing else. 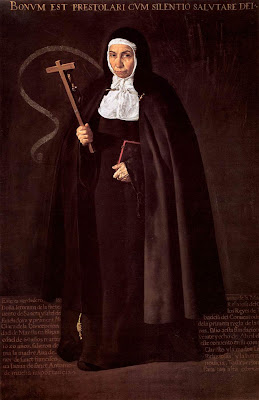 Velazquez’s portraits of Juan de Pareja and Innocent X have reached canonical status, erasing some of the shock they once gave, so I propose a lesser-known work—Velazquez’s Portrait of Mother Jeronima de la Fuente (above, from 1620)—as a fresher example of his power portraiture. Mother Jeronima was clearly one bad mother… superior. Her stern looks still give me flashbacks from Catholic grade school. The ribbon streaming from her mouth reads “I shall be satisfied as long as He is glorified,” but I could easily imagine it saying “Open your Baltimore Catechism to page 48—the venial and mortal sins!” Almost 400 years later, the psychological depth of this portrayal still can make you shake in your boots. In the movie White Men Can’t Jump, the two main characters debated over whether the white man could truly “hear” Jimi Hendrix. Fortunately, there’s no need to debate over whether the common art lover can “hear” Velazquez as well as the practicing artist. Velazquez speaks as clearly and boldly in the twenty-first century as he did in the seventeenth.

I saw the "Portrait of Mother Jeromina de la Fuente" when it was in the "Tesoros" exhibit. I LOVED it!!!!!

interesting and lots of themes I love.... for instance ancient art, i love it indeed.